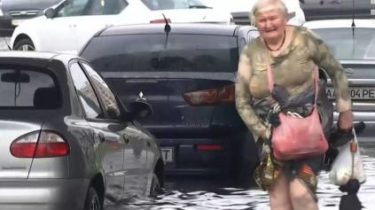 Taxi drivers are almost the only one whom bad weather brought at least some benefit.

Kiev again choked in the water – a protracted rain and hail stopped the movement of cars and public transport and falls on the stairs and filled in the ceiling of underground passages added hassle of pedestrians. Bad weather, Internet users have called the Metropolitan Apocalypse, says the story TSN.19:30.

Element raged for about an hour, brought down trees and billboards flooded the streets. Road route under the bridge on Dorogozhychi became impassable. The journalist of “1+1” Vlad Sydorenko dare to measure the depth was only 15 metres and the water was already waist-deep. Almost as flooded underpasses near metro stations “Shulyavska” and “Polytechnic Institute”. “This has not been, this is the first time such” – are recognized as the local saleswomen, and passers-by suggest they sell an inflatable boat, they say, this product would have demand.

Videostage rain and hail stopped the traffic in Kiev

Element raged for about an hour. Felled trees and billboards, flooded streets and underpasses. Bad weather traditionally brings earnings to the capital’s taxi drivers. But there after bad weather and an alternative form of transport: a few brave souls took to the roads to float on the inflatable toys. 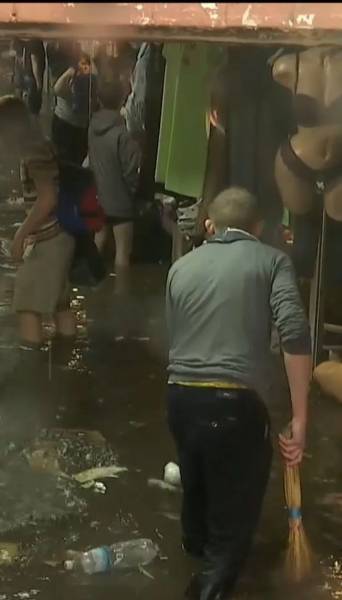 The salvation of the good is not all: the fruit stalls floated, and personal belongings of those whom the rain caught under the ground. They wanted almost the entire city. The utility officially closed the door on the whole street. Kiev shoot video and remember urban landscaping “kindly quiet word”.

Bad weather traditionally brings earnings to the capital’s taxi drivers: some five kilometers in any point of Kiev after the rain can be overcome in 200 hryvnias. But appeared in the capital after bad weather and an alternative form of transport – a few brave souls took to the road to swim on inflatable toys.