In Cherry near Kiev faced three of the bus, there are victims 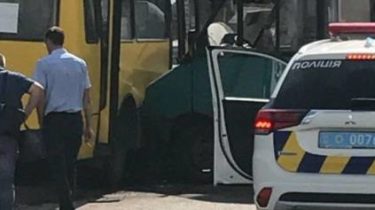 In Cherry near Kiev faced three of the bus, there are victims

© State of NP in the Kiev region

Previously the police found that one of the drivers of minibuses became ill behind the wheel.

In the city of cherry occurred triple the accident with participation of minibuses.

About it reported in Department of communication of the police of Kiev region.

“According to preliminary reports, 65-year-old driver of a Shuttle bus №732 became ill, and he went into the oncoming lane. There was a collision with two other buses No. 306 723 moving in the opposite direction”, – militiamen told.

In the accident injured two drivers and two passengers, with various injuries were taken to the district hospital.

Now the scene works investigative team interviewed accident participants, witnesses, establish all the circumstances and causes of the accident.

We will remind, inhuman conditions have become a tradition of long-distance transport in Ukraine. Passengers complain that the shuttles drop away seats, seats located so that the legs barely fit, the service is not improving, but prices are rising.

After the last incident with the deaths of the patrol police started a special “Carrier”.

“Identified 382 of technically faulty vehicles. 79 converted with violations of the relevant norms and standards. In General, detected more than 2,000 violations of the lawcommitted by drivers-carriers. Recorded 10 facts of management of the buses in a condition of alcoholic, narcotic or other intoxication,” – said the police.

GU NP in the Kiev region