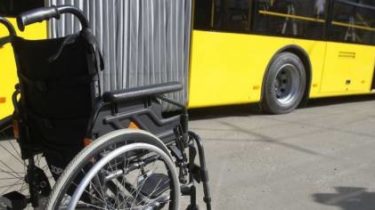 For the first evening of caring has collected six thousand hryvnia for the purchase of a new stroller.

In Kiev, a guy with disabilities stole a wheelchair, which is actually the only means of movement.

The incident occurred a few days ago in the capital. Guy with cerebral palsy Alexander became ill on the street, the temperature rose to 39 degrees, so the mother took him home during the evening walk. The stroller was left in the porch as usual, and the door opened in anticipation of the doctor. 15 minutes later, the neighbors noticed that the stroller is not.

“I can’t say, even to call these people normal. I would ask them – good people, come to your senses, you only sin themselves take the soul. Who did you get? A person with a disability,” says Alexander’s mother Love.

The offender has searched for law enforcement officers, relatives and neighbors, but to find it failed. The new wheelchair costs from 12 to 20 thousand hryvnia. It’s almost unbearable amount for the mother-a pensioner, who works as a cleaner. To search for intruders and strollers even made a publication in the social networks. The situation is not left people indifferent and they began to raise money to buy a new stroller.

Ramps, elevators, audio signals: with the fall of the pedestrian zone adjust to people with disabilities

The first night of Love has come six thousand hryvnia. It’s not enough to buy a new stroller, but a few days to gather up the required amount possible, because already dozens of people offered real help.