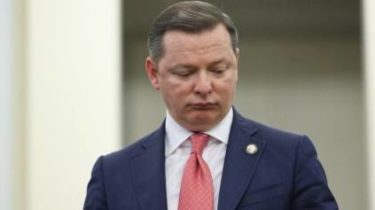 The MP is not the first time sells the property to the former Deputy Rygenkova.

The leader of “Radical party” Oleg Lyashko has made changes in his income Declaration, having sold real estate worth 16 million hryvnias said Alexander Ryzhenkov – probably a former MP from the Party of regions, who voted for “dictatorial laws 16 January”.

A notification about significant changes in property status appeared in the Unified state register of declarations on 2 August.

It is unknown what property was sold to Lyashko.

We will note, according to the Declaration of MP in 2017, then he sold Rygenkova apartment for 15.9 millionand got 1.87 million hryvnia for the lease of real estate. Son of Alexander Ryzhenkov – Yuri – is the General Director of “Metinvest holding” is a company owned by Rinat Akhmetov and his business partner, the people’s Deputy Vadim Novinsky.

The mother Lyashko in the past year the apartment for 2.4 million and Parking in the exclusive area of Kiev

We will remind, in the spring of 2017, the NAB filed a case against the leader of “Radical party” Oleg Lyashko. The anti-corruption Bureau suspects of the people’s Deputy of illicit enrichment, and the MP calls the case a “political order”.

The basis for the institution of criminal proceedings was the investigation of journalists, where they spoke about the movable and immovable property of the family of the Deputy and his business interests. In particular, in the years 2016-2017 politician who never formally had a business, bought a house for 15 million UAH, and another one for 5 million UAH bought a civilian spouse of Rosita, where Lyashko was married on June 2.

The unified state register of declarations