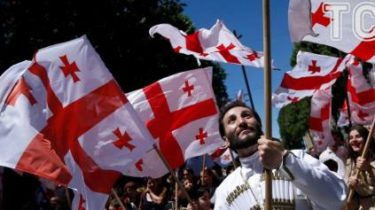 This year marks 10 years since the beginning of the Russian attack on Georgia.

Ukraine supports the sovereignty and territorial integrity of Georgia and calls on Russia to withdraw its troops from the occupied Georgian territories – Abkhazia and the Tskhinvali region.

This is stated in the statement of the Ministry of foreign Affairs of Ukraine on the occasion of the 10th anniversary of the invasion of Russia to Georgia.

“Ukraine once again confirmed its consistent and strong support for the independence, sovereignty and territorial integrity of Georgia within its internationally recognized borders, and commitment to the strategic partnership between our countries,” – said in a statement.

The military has raised the flag of Ukraine in Georgia. NATO organized large-scale exercises

The Ukrainian foreign Ministry has urged Moscow to fulfil its obligations under the Agreement on ceasefire of August 12, 2008, to withdraw military units from the occupied territories of Georgia and to take other measures for the demilitarization and de-occupation of these territories.

Ukraine also asked the EU, the OSCE, the UN and the United States and the entire international community to continue efforts aimed at resolving the Russian-Georgian conflict.

Recall Prime Minister Dmitry Medvedev said that Georgia’s accession to NATO could lead to disastrous consequences. The Russian head of government said that the Russian invasion of Georgia in 2008 was not inevitable.

In Georgia it said that “Medvedev’s statement is nothing new” and stressed that chose European and Euro-Atlantic integration.