In Kiev on the Playground formed a 5-foot “geyser” 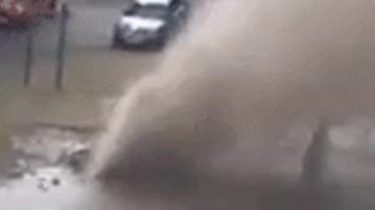 In Kiev on the Playground formed a 5-foot “geyser”

August 7, in Kiev on the street Kurnatowska has been a burst pipe with cold water which from under the ground began to beat fountain height of about five meters.

It is reported by the Informant.

A pipe burst right on the Playground, “geyser” of water and mud was beaten for about 15 minutes. Then the pressure decreased, but the yard flooded with about half an hour.

In the end, the water flooded the sports field, wet people who were there. The yard turned into a mess of sand and dirt. In addition, the fountain left a 1.5-meter hole.

Breakthroughs running underneath the streets of the pipes – a frequent phenomenon for Kiev. In October last year at the intersection of street and Laboratory burst pipe with hot water. The street for 15 minutes pour boiling water over. The accident damaged several cars. The owner of one of the parked cars had to go into hot water knee deep to get in the car and try to save him.