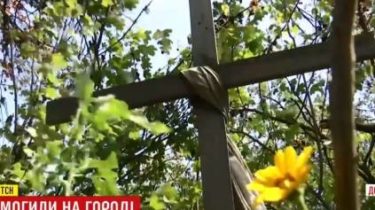 Locals claim that the other options are simply not there.

In the Donetsk region left the graves of civilianswho died in 2014 and are buried just near their homes. The cemetery remained in the occupied territory, and to rebury the remains, as it is the tradition, some of the relatives can not, and someone does not want to, says the story TSN.19:30.

The edge of the village of Sands, broken high-rise buildings, near which among the bushes and dry branches is the cross – the resting place of Yuri Overchenko, who lived in the house and died in his basement. “At that time weren’t allowed to bury in a cemetery, because all the roads were closed. Buried near houses in the hope that soon reburied. And so we wait four years”, – said the resident of the village Lyudmila Medical.

Buried among the gardens and fields. In the Donetsk region left the graves of civilians who died in 2014. Resting just near their homes. The cemetery remained in the occupied territories, the entrance to the Sands is closed. To rebury the remains, as required by tradition, some can’t and some don’t want to. 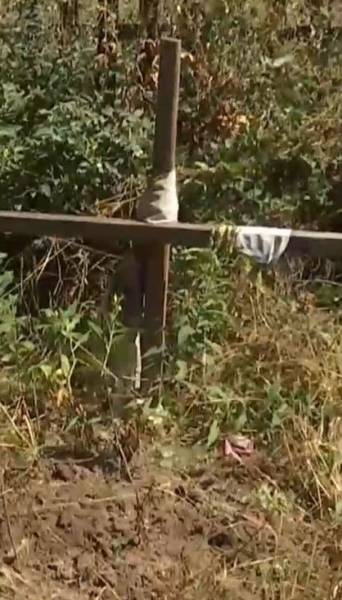 She knows three such graves in the Sand, and in the neighboring villages there are at least 13. Just a little further in the grey area in one place, straight in the box buried five or six people who walked across the field and exploded. “Another way to bury him was impossible – there was shelling. Not be identified was because torn by dogs. One was identified by the passport,” – said Medical. They buried their fellow villagers themselves local, one of them – Sergey Dikanov. He helped old and took care of that at least close to their homes to bury the bodies of those who died from the shells.

Near his home, was buried, and that he was killed when was carrying humanitarian aid to the villagers. The shrapnel from the shell of fighters got it right in the head. Now the mother-in-law and his wife moved from the Sand under Mirograd. Only a year later, they received a death certificate, but it is not specified that it happened because of the war. To prove that the man killed the shard, the necessary exhumation – then the family will have a chance at least some payments. But to dig up and rebury Sergei Christian-his family can’t because not enough money even life.

Besides, the area the Sand for a long time is the red area of OOS, where a civilian is not allowed. “That’s right, it’s for their own safety,” explains one of the defenders of the village. Relatives of the victims dream to rebury the bodies in the local cemetery, but it is now in the occupied territory near the airport. This area is mined, the permit for burial there, no one will give as security guarantees. Eyewitnesses say that the fighting damaged a cemetery, find a grave is incredibly difficult, because most of the monuments are broken. But the former residents of Sand continue to hope for the best. “The rapid conclusion of the war, in order to rebury humanly to the cemetery,” says Lyudmila Medical.