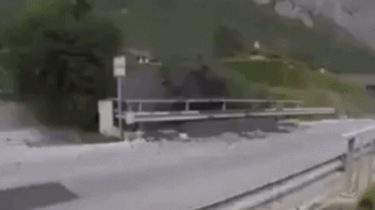 However, nobody was hurt.

In the small town of Chamoson in Switzerland August 7, descended powerful mudflow. The locals shot a stream of mud and stones on video and shouting ran away when he approached him.

The video shows SEL goes by and large the den and falls asleep the road, smashing everything that comes his way. Another video shows how the dirt erupted from under the bridge on the road and covered parked cars. However, nobody was hurt.

Chamoson is a small town in the South-West of Switzerland, surrounded by mountains. There are slightly more than 3,700 people, the vast majority of them speak French.

Selle occur in mountainous areaswhere there are large stocks of loose fragmental material. Causes of mudslides are almost always heavy rains, the intensive melting of snow and ice, washed with dams of water reservoirs, as well as earthquakes and volcanoes. Human activities can also be the reason for floods is deforestation, explosions of rocks when building roads, working in quarries etc. can contribute to disaster.