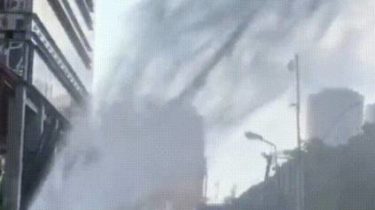 It happened on Victory Avenue.

On 13 August in Kiev, near the Central registry office from under the asphalt, broke a large water fountain.

The water began to beat out of the ground at 16:00 on the Avenue of Victory.

We will remind, on August 7 in Kiev on the street Kurnatowska has been a burst pipe with cold water which from under the ground began to beat fountain height of about five meters. Fountain left a 1.5-meter hole.