In the Donbas checked the readiness of the artillery “Hurricane” 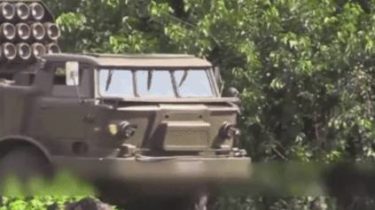 In the Donbas checked the readiness of the artillery “Hurricane”

© Facebook/Press-centre of the headquarters operations of joint forces

Artillery is designed to destroy manpower and equipment of the enemy sea targets.

In the area of Operations of the combined forces in the Donbas are planning to increase the combat readiness of rocket artillery.

The order gave the commander the General-Lieutenant Sergey New, according to the headquarters of OOS on the page in Facebook.

We are talking about a reactive system of volley fire “Hurricane”.

“The main objective of MLRS “Hurricane” is the defeat of manpower, equipment of the enemy and the sea objectives. During field training, the battery occupied firing positions, developing job goals and moved away from the firing positions”, – noted in EP.

According to headquarters, the crews of combat vehicles with the tasks were done perfectly and ready to perform tasks as directed.

Earlier it was reported that the canadian company PGW Defense Technologies will give the Ukrainian military sniper rifles for the sum of 770 thousand dollars.