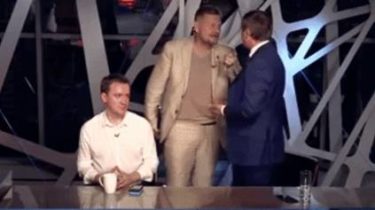 The deputies came to blows after allegations of gay pride parades.

People’s deputies Sergey Shakhov (“will of the people”) and Ihor Mosiychuk was admitted (the Radical party) got into a fight in a live TV channel “Direct”.

Skirmish between deputies began after the shahs said that the Chairman should not attend gay pride parades. Angered by the Deputy from the radical rose from his seat and approached his opponent and said that was never a gay pride parade and demanded an apology.

Elected officials have been exchanging mutual insults, after which the checks were sent down Mosiychuk. Radical got up and tried to beat his opponent with the cane, but members of the lit host.

Subsequently, the clash between the deputies continued in the Elevator of the office of the TV channel.

We will remind, recently between the deputies of the Verkhovna Rada Igor Mosiychuk from the “Radical party” and Sergey Leshchenko from “BPP” was held a verbal altercation. After the last question about the orientation of Oleg Lyashko MP of “radicals” hit his colleague with a cane.