Through the courts and Prosecutor’s office: victim in road accident the journalist had to get the police to begin an investigation 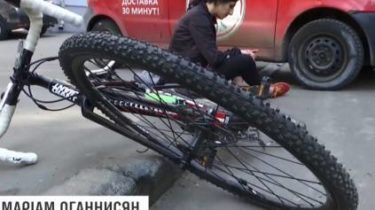 Through the courts and Prosecutor’s office: victim in road accident the journalist had to get the police to begin an investigation

The lawyer said that this situation is not unique.

Journalist Mariam Hovhannisyan took part in the flashmob “bike To work”, but was involved in an accident. It happened in the spring, however the fact in the Unified Register of Pretrial Investigations made just now, says the story TSN.19:30.

“Ride often – like to go in the woods. To work on a two-wheeled, I have not traveled. Frankly – scary. After all, drivers like us, do not behave very correctly”, – said the victim. A few blocks from the office she was hit by a car pizza delivery – the driver of a car missed the bike, even two-wheelers moving along the main, and the car went to a secondary road.

Once back in the spring Mariam Hovhannisyan, who was riding a Bicycle, was hit by a car in the Unified register of pre-judicial investigations it has been only now. The police say – blame the doctors. They allegedly not submitted in time the necessary documents. Why the case is delayed and how safe is it in Kiev cyclists – TSN. The week Mariam was in the hospital, two at home on sick leave. Now she recalls that he heard from the driver in the first minutes after the collision. “Shall I call the police? Need help – I have not heard. Then he started looking in the phone somewhere to called by now, so the pizza was taken away,” she said.

In Kiev has begun work the minute the bikes

This accident occurred in early April, and until the end of July the information was not even made in the unified register, but had to do it during the day. “Mariam received injuries of moderate severity. Her jaw was broken. Now we submit a complaint against the police inaction,” said the lawyer of the injured Lawrence Tsaruk. He argues that such cases are not isolated, and therefore filed a motion with the court. The production was opened by the Prosecutor’s office there to monitor the event log and found the omission of colleagues. “It was revealed that reason was enough. Therefore, the authority of the National police were supposed to begin criminal proceedings in April. Based on the results of forensic medical must be made a decision in relation to the driver,” – said the press Secretary of the Prosecutor’s office of Kiev Hope the maximes.

The police justified that it did not receive in time the necessary documents from the ambulance. “We need the paramedics to provide the correct information. It happens almost every week when in the specified incorrect material damage to victims,” – said the head of the Department of investigation of crimes in the sphere of transport Podolsk police Department of Kiev Stanislav Patlan. In the pizzeria they say that 21-year-old Semyon, who was driving, from August 1 there is already not working, to comment on the accident in the school don’t want and wait for the findings of law enforcement.

In Kharkov, the woman driver did not notice on the transfer 4-year-old cyclist

Last year in Ukraine, 85 cyclists involved in an accident. “Mutual respect should be on the road definitely. Is there 10% of drivers that are not sufficiently docile on the road. And such who just don’t understand how people can behave the bike on the road,” says the curator of veloscope of the Association of cyclists of Kiev Anna Hraban. As for the accident with the participation of the journalist, in front of investigative experiments and technical expertise. If the driver is found guilty, he will face a fine or up to three years of restriction of freedom.