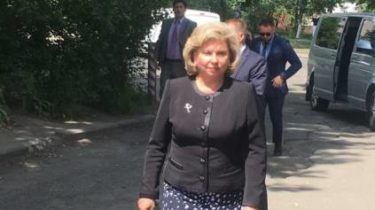 Moskalkova does not respond to the offer of the OSCE.

Commissioner for human rights of the Russian Federation Tatiana Moskalkova does not respond to the proposal of the OSCE representatives to meet with the Ombudsman of Ukraine on 21-22 August in Minsk. About this on his page in Facebook wrote the first Deputy speaker of the Verkhovna Rada of Ukraine Irina Gerashchenko.

But on the website of the Russian Ombudsman for human rights has reported that on August 21 it will hold a press conference in Moscow devoted to the fate of the sailors of the ship “Nord””.

“Moscow has traditionally “frost”, not responding to the suggestions and even an official letter. The position of an ostrich – hide your head in the sand and pretend that the problems of political prisoners do not exist. Especially shameful position for ombudsvumen. I think it is important that representatives of the press asked 21 August Moskalkova why she ignored a request to meet with his counterpart Denisova in Minsk and held a press briefing the other day,” writes Gerashchenko.

“Why is she visiting Sentsov left outside the gates of the camp Denisov, ignoring the agreement between the presidents Poroshenko and Putin. After all, the mandate of Ombudswoman allows you to during visits to the prison she was accompanied by a certain person. Why didn’t she appealed to President Putin asking him to pardon Sentsov and other Ukrainians, because its mandate allows it. If she knows that 11 (at the moment) Russians convicted in Ukraine for terrorism, wrote a petition to President Putin to bring them home, to Russia in exchange for Ukrainian prisoners, and whether it is ready to put at least some effort to return home military Ageeva, other, smuggled into Ukraine by the Russian authorities, in exchange for the Ukrainians”, – he added.

On the website of the Commissioner for human rights of the Russian Federation T. Moskalkova appeared information that on 21 August it plans to spend …. press…

Recall that in March the coast guard of Ukraine detained the Russian fishing vessel “Nord” in the sea of Azov, accusing the crew that he “came to the territory, which was under temporary occupation”. The crew was released, but the ship is still detained.