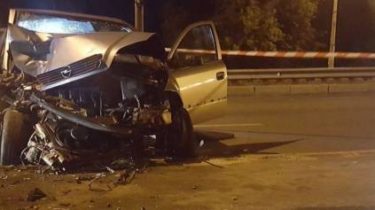 The driver of the car Opel at speed crashed into a concrete block.

On Friday, August 17, in Kiev, prospect Kurbasa, on Borshchagovka, a taxi car accidentin which killed a passenger.

When the driver is at full speed crashed into a concrete block, a woman was in the back seat of the car and received a severe blow. She died in the ambulance. The driver is almost never injured, he was taken for examination.

We will remind, earlier in a terrible accident in the Zhytomyr region killed two people. The driver of the first culprit fled the scene, and then he went to the police.