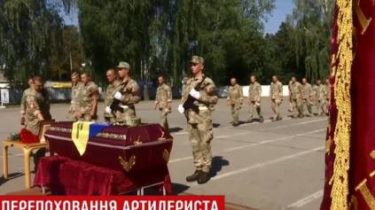 In Sumy buried 28-year-old gunner Alexander Buvala, who died September 3, 2014 in the Luhansk region along with 16 other cities. Ukrainian military shelled the territory of the Russian systems of volley fire “Smerch”, says the story TSN.19:30.

All this time the fighter’s mother refused to believe his son’s death. “I lived with the hope that he will return. All the days I waited and thought I didn’t believe it until the day before I arrived and said,” says Hope Buyval.

Alexander Buival was one of the 17 gunners that in 2014 in the Luhansk region killed during the shelling of the Russian systems of volley fire “Smerch”. 16 soldiers were buried immediately, but Alexander is still believed missing. Only now managed to find his remains. 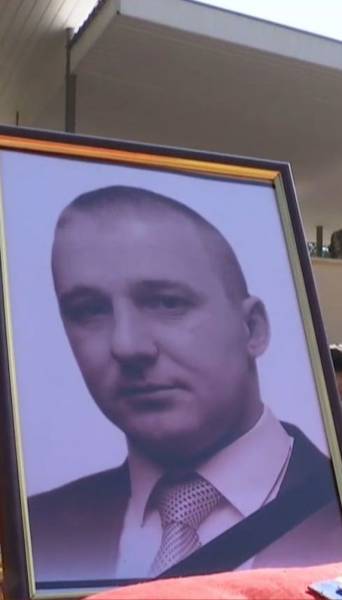 Military remember that the camp of the 27th Sumy reactive artbrigady at the village of Victory the Russians shot treacherously. “First used high-explosive shells – well, with the aim to drive the personnel to the shelter. Well, and then there was a bomb that actually destroys everything. Machine even melted, metal. That is, the soil, the people, everything that was in that place – in fact, there are alloy”, – told officer Alexander Kurisko. 16 victims were found and buried immediately, but Alexander’s body to find failed.

His friend Nikolai Tkachenko under fire miraculously survived because he was thrown by the blast. In the autumn of last year he returned to the Donbass and led to the place of infernal fire their hangar search engines mission “Black Tulip”. “I knew where he could be. Not exactly, but. And they know how to look for,” he explained. “He didn’t sleep. Says I can’t sleep because he’s not around, he died. And here he is back with us and still found”, – said the representative of the humanitarian mission Alexey Yukov.

DNA examination confirmed that the remains belong to Alexander Buvalo Later searchers with the military stumbled on another discovery – the remains of the Russian projectile system “Smerch”. They are already attached to the materials of the criminal case as evidence. “It is, in fact, the murder weapon that was used by the enemy, the aggressor, the Russian Federation. Further can be used in litigation concerning the army of the aggressor against Russia,” – said the representative of command of 27th brigade.

The fire was conducted from the territory of Russia – has already been proved. This is indicated by the trajectory of the projectile and eyewitness accounts. “To the border with Russia from the Parking lot of our base camp 40 kilometers. The testimony of all the witnesses talking about how was arrival. From the territory of Russia”, – said Kurishko. The deceased from the actions of the occupiers, Alexander Buvala but the mother left a wife and two young children. Buried fighter on the walk of Fame next to his fighting sister.