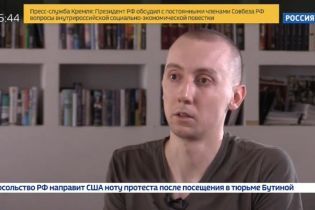 Friends of the prisoner believe that he was forced to incriminate himself.

Aseev in an interview with Russian journalist Alexander Sladkov confessed to espionage and cooperation with Ukrainian intelligence. The journalist said that for him the slogan “United Ukraine” – is not an abstraction, he believed and continues to believe.”

Reporter Sladkov said in a report that came to the Donbass for an interview with Aseev. The conversation with the Ukrainian hostage held in the library. Krupskaya Donetsk, Aseeva was brought there in handcuffs, accompanied by a man in a Balaclava. Also on Russian TV showed a camera, which is held Ukrainian journalist.

The former people’s Deputy of Ukraine Egor Firsov, who first reported the disappearance Aseeva last summer, believes that the militants knocked the journalist recognition of espionage.

“Something happened, which I repeatedly warned. The militants knocked Stas recognition of espionage and collaboration with the intelligence. He devoted an entire transmission on the channel “Russia 24″. There is a whole set of fakes and stamps and diaries, and espionage, and participation in the battalion and the Kyiv curators. The impression that Stas was forced to confess all that can be imagined,” wrote Firsov in Facebook.

“It is hard for me to watch this video… voice Trembling, hands that are already in the habit of holding “in handcuffs”… staged shots, where he eats, and on the table a bottle of mineral water and bubbles with drugs,” he added.

Militants using Russian media published a “confession of espionage” by Stanislav Aseev (Vasina), something Happened, what I…

A former hostage of Pro-Russian militants, scientist Igor Kozlovsky also sure that Aseeva were forced to confess to espionage.

“They” are all trying to get to do those interviews and many go for it. Condemn them not. Now Russia has arguments. And that’s bad. But Stas survives this way. Agreed to an interview, this means that he or family were threatened or promised something. Probably both,” wrote Kozlowski in the comments to the post Firsov.