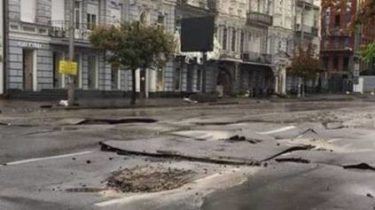 In the center of Kiev dipped asphalt © dtp.kiev.ua

The reason could be a breakthrough sanitation.

In the center of Kiev, on the street Antonovich, during the night the weather dipped asphalt on the highway.

It is reported that the dips in the road were the result of a breakthrough of sewer systems. Also washed away chunks of asphalt.

Kiev may again turn the heat. Authorities warned about the storm

In Kyiv, Gorky street (Antonovicha), after rains into the bargain burst sewer. Formed pits and washed away the pieces…

We will remind, in the evening of 18 August Kiev again covered the powerful shower. Under the water were some streets, in some places cars couldn’t drive because of the large amount of precipitation.