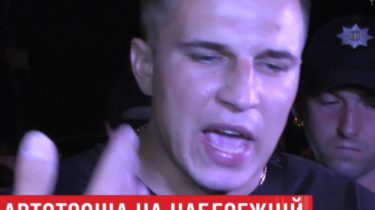 The man already before the accident, was deprived of the license.

Drunk and without a license. On the capital’s waterfront the driver of the BMW at high speed crashed into a parked car. From the impact scattered three cars. Details from them flew a few meters. Of people, luckily no one was hurt. On a place of accident there arrived the patrol that had to call for help. Also gathered around an angry crowd of witnesses.

Kiev, nine in the evening. The promenade is racing the black BMW. First ahead of all, who is going in the wrong direction. And then the acceleration hits a car parked on the roadside. From a car that simply was almost nothing left. Two broken rear.

The owner of a broken “Hyundaya” at the time, was celebrating with his wife wedding anniversary. The celebration was interrupted by the sound of a car strike. Looked out, and there…

“Thrown out on the lawn of our car. From the car stepped a man in a black t-shirt with cerebritis skull. Under the influence”.

A guy with a silver skull took to their heels. It caught men.

“Threatened that if we testify, he will use force. He’s got the traumatic weapon”.

Near the broken machines going crowd of the indignant people. They need to immediately check the driver for alcohol. The refuses.

Video settings in Kiev the driver of the BMW flew into a parked car, threatened witnesses and tried to escape

Drunk and without a license. On the capital’s waterfront the driver of the BMW at high speed crashed into a parked car. From blow cars has scattered, like a toy. Details from them flew a few meters. On a place of accident there arrived the patrol that had to call for help. After all, there was an angry crowd of witnesses. 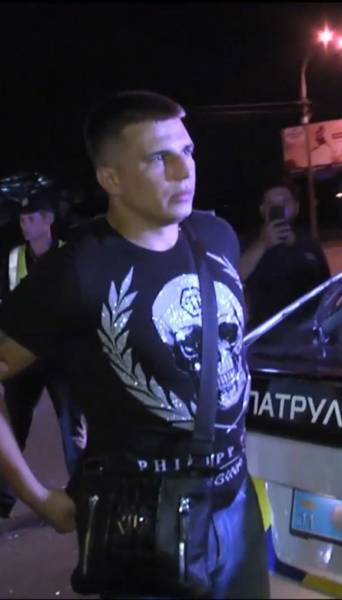 In the cabin of the BMW, except the driver, were still woman and man, who wanted to take the blame.

“Man, sober, says he was behind the wheel. The one with the signs of intoxication, said that was not the driver,” says patrolman Eugene Serdiuk.

The clarification of the circumstances continues for several hours. The crowd are getting restless and they cry, “Shame! Shame!”. Someone with his fists thrown at the patrol. The aggressive lay face down on the asphalt. And then the legs are pulled in the car. The man make the Protocol and released. And the culprit taken from the scene, as explained in the patrol police to avoid being lynched.

The name of the drunk driver the police did not disclose. TSN sources say that it is 30-the summer inhabitant of Kiev Evgeny guts. Police say, even if he were sober, was not supposed to drive because it even before the accident deprived of rights. In social networks circulate photos of this BMW. A month ago, she caused an accident in the capital. Now the car on a shtrafploshchadka. The driver free.