Drunk drift in Kiev: the police let the BMW driver, despite the protests of witnesses 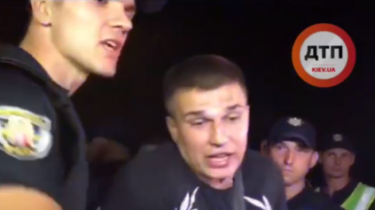 Drunk drift in Kiev: the police let the BMW driver, despite the protests of witnesses

Car men were evacuated, and he was released.

The driver of the BMW, which at high speed flew into three other cars on the capital Dnieper embankment, had obvious signs of alcoholic intoxication.

About this TSN.ia said the head of the press service of the police of Kiev Yana Corner.

“He had obvious signs of intoxication: Sarah mouth, facial flushing, slurred speech. His patrol was taken to the police station, because the crowd is normally not allowed to issue administerial,” he told police.

It issued article 124 (Violation of traffic rules, resulting in damage to the vehicles), article 130 (Driving drunk) and article 126 part 4 (management of the vehicle by a person not having corresponding documents on the right of control), because the driver is deprived the rights to management.

Car men were evacuated, and he was released. As seen in the records, in response to the demand of the patrol against the alcohol test, the man notes, “owes nothing”, “it’s all intrigue and provocation”, and the wheel was not he.

We will note, earlier it was reported that on 20 August at about 20:20 p.m. in Kiev on the Dnieper embankment car BMW at high speed crashed into four other cars. However, later it became known that the driver damaged three cars.

The time of the accident in Kiev on the Waterfront, where inadequate on BMW smashed several cars, bykuet. https://youtu.be/L6qXeEIRBFw Hard accident on the Dnieper embankment, 16 in Kiev. Machines scattered throughout the dear, the buildings crushed “in the trash”. #BMW at high speed knocked down a few cars! Information on victims is specified. At the scene arrived 4 ambulance crew and several police patrols. According to eyewitnesses, the guy did not have time to sit in one of the cars, thereby saved his life. Follow our news for more information. Photo: Valery Connect to our Instagram instagram.com/dtp.kiev.ua Your photos/videos after 5 minutes in the air! #accident #Kiev #tpkav #photo #today #chronicle #dtp #dtpkiev #dtpkievua #accident #kiev #kyiv #today #crash #tpkav #dneprovskaia #BMW

As the portal dtp.kiev.ua despite the presence of the police, the perpetrator left the scene. In this regard, between witnesses and police clashed.

According to readers of the page, when the driver himself was a traumatic gun, which he “threatened all around.”

It is noted that on a scene there arrived the car with the numbers 7777, then the unknown quickly took all personal items from BMW.

Video: the inadequate and the fight between cops and local residents…. Video from our reader Julia At the intersection of bereznyakovskiy and the Dnieper embankment a group of young people, according to witnesses “majors” were driving a black BMW, which at speed crashed into a parked car. Only affected 4 cars. There were no casualties. The police have been unable to find out who was behind the wheel. The main suspect was in possession of the traumatic gun, which he threatened all around. data from eyewitnesses: “there Arrived the car with the numbers 7777 quickly took all their personal belongings with BMW”. Patrol during his long proceedings, arrested several of the witnesses. One because he touched the patrol car, the second – for insults in the direction of the representative of national police. It lasted about two hours. Gathered more than a hundred people who required the survey on alcohol. Several times there was a fight between the patrol and the citizens. More telling video. They are instead of a thousand words

Also, according to witnesses, patrol during the long proceedings, arrested several of the witnesses. One for the fact that he allegedly touched the patrol car, the other insults in the direction of the representative of national police.

Accident, sale of psychotropic substances and threats to the journalist. The court arrested the son of ex-ally of Medvedchuk

“It lasted about two hours. Gathered more than a hundred people, who demanded osmotron alcohol. Several times there was a fight between the patrol and the citizens”, — stated in the message.

As reported, on Sunday evening, August 19, Novoilinskoe highway near Kiev was a terrible accident, which killed four people, three more were in the hospital. According to preliminary information, a Suzuki SUV was driving from Irpin and Citroen was moving towards him. Suddenly the driver of the Suzuki decided to turn in two solid stripes. The driver of Citroën at high speed flew into the SUV in the side.