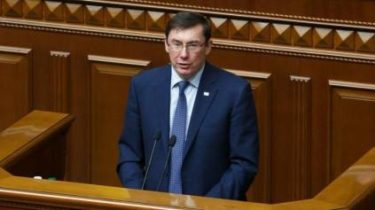 The attorney General is not going to work for the benefit of any of the candidates.

The Prosecutor General of Ukraine Yuri Lutsenko is considering whether to participate in the parliamentary elections of 2019.

He told about it in interview to “the Ukrainian truth”.

“I think over to take part in the parliamentary campaign. But before the end of the presidential race is already considered impossible, unless so decided by the President or the Parliament, to leave this chair. So I immediately removed all sorts of conversations that I was a candidate for Prime Minister, Presidente don’t know where I record,” he said.

Lutsenko also added that during the election campaign is not going to work for the benefit of one candidate or another, particularly President Petro Poroshenko.

“He is also the man who made my candidacy (for the appointment of the Prosecutor General – ed.), giving me the credibility and the ability to achieve certain results. From this point of view, I in the team of the incumbent. But this does not mean that during the elections I’m going to somehow use this to achieve one result or another,” said genprokuror.

He noted that there were no politically motivated prosecutions or proceedings the General Prosecutor’s office will not do. Lutsenko gave an example of former defense Minister Anatoly Grytsenko, who previously spoke about the alleged planned harassment by law enforcement.

“If you are interested in separately Gritsenko, remember, when he was defense Minister. The limitation period of about ten years. This term has been exhausted. So you just have to relax and not think about the fact that you can get good rankings in the position of “prosecution authorities”, – said the head of the GPU.

Earlier, Lutsenko told what “trumps” is going to use Poroshenko during a election campaign.