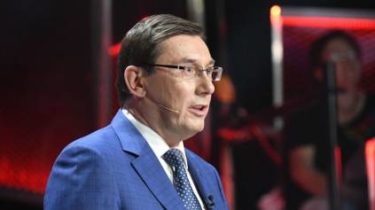 Lutsenko advised Petro Poroshenko five points, which would help him to change the situation.

Prosecutor General Yury Lutsenko is convinced that the current President of Ukraine may be re-elected to the highest office.

He declared to “the Ukrainian truth”.

Lutsenko advised Petro Poroshenko five points, which would help him to change the situation in the first place, and within its competence, but to publicly announce these theses, he did not.

“Similarly, I am ready to talk about the election with other kindred spirits to me politicians. I also could recommend that could be done. In this context, for example, I meet with Yatsenyuk, Klitschko. We often talk about what is happening in the country. Where we find the General opinion, we find”, – he said.

The Prosecutor General believes that Poroshenko as President, a minus – infrequent communication with people.

“I can’t hear his dialogue with the people. I told him about it, so I can repeat here. In my understanding the President is in any case a leader. He must constantly explain to people where we are, why it happened, where we are going and how we’ll do it,” – said Yuri Lutsenko.

The attacks on activists in the South is part of Russian plan to destabilize Ukraine.

However, the Prosecutor General acknowledged that Poroshenko would listen to advice, but also the head of the GPU is changing its position because it is not until the end informed.

“Very often, when I come to the President’s Administration charged with negativity, I get the information, which simply does not possess. Although it would seem, here I know enough,” he said.

Also Lutsenko said that the President’s approval rating now is not the best. The public Prosecutor besides, has told, as he tries to win the election.