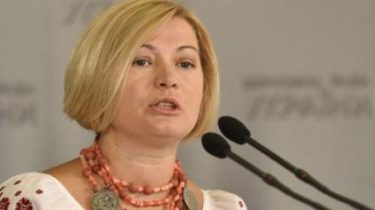 The Ukrainian side is ready to pardon the two Russians to be exchanged for the Ukrainian military, which is 3 years held in the occupied part of Donbass.

Ukraine is ready to pardon the two Russians to exchange for the Ukrainian militaryillegally held in the Donbas.

This was announced on his page in Facebook, first Vice-speaker of the Verkhovna Rada of Ukraine, the representative of the President in Minsk humanitarian group TAG Irina Gerashchenko.

“Minsk. The second day. The Ukrainian side is looking for all possible ways to unlock the process of release of hostages from Russia and from the occupied territories. Made another concrete proposal to the Russians: Ukrainian side is ready, as an exception, to have mercy on the two Russian citizens who have health problems, give it to the Russian Consul in presence of the representatives of the OSCE and the ICRC with the simultaneous transfer of Ukraine Ukrainian soldiers, who for more than 3 years illegally detained in the Donbass”, – she said.

According to Gerashchenko, Ukraine is deeply concerned about that for a long time and has not received from Russia any no oral or written response to the proposal to transfer them Russians who have committed crimes, in exchange for the Ukrainians in Russian prisons.

“Waiting for an official response of the Russian Federation on the proposal. The Ukrainian side believes the same priority of importance of release of political prisoners of the Kremlin in Russia and the hostages of the Kremlin in the occupied territories of Donbass. And the decision regarding the liberation of political prisoners, and hostages takes only the Kremlin today, the Russian Federation and their puppets to block the release of the hostages and all the healthy initiatives and attempts to unblock this issue”, – said the first Vice-speaker of the Parliament.

Minsk. The second day. The Ukrainian side is looking for all possible ways to unlock the process of release of hostages from Russia and…

Earlier, the 22 prisoners in Ukraine, the Russians wrote to the President of the Russian Federation Vladimir Putin the statement with a request to exchange on one of Ukrainian political prisoners. One of these days these statements by the diplomatic mail was transferred to the Ministry of foreign Affairs.