In Vrubivka the attacks damaged many homes and a school.

Independence day at the front began with the shelling of civilians. The militants hit the village of rockets. 35-year-old man died, his family miraculously survived, damaged houses on the entire street.

Seven rockets militants have fired at civilians in the village through the Luhansk region. The shelling started at six in the morning. One projectile flew straight into the house. At that time there was a family. Splinter caught 35-year-old Andrey Oleynik. He died. Miraculously survived his young wife and children, aged seven and nine years. In General, damaged houses on the entire street. Now I counted eight houses. Povyletali glass, damaged roofs, now counted the amount of damages. Damaged and school.

In place have worked and the military from the center for coordination and control of the ceasefire. They say on the site recorded seven hits. On the road funnels from them.

Videoder Independence began at the forefront of attacks on civilians

Independence day at the front began with the shelling of civilians. The militants hit the village of rockets. 35-year-old man died, his family miraculously survived, damaged homes across the street. 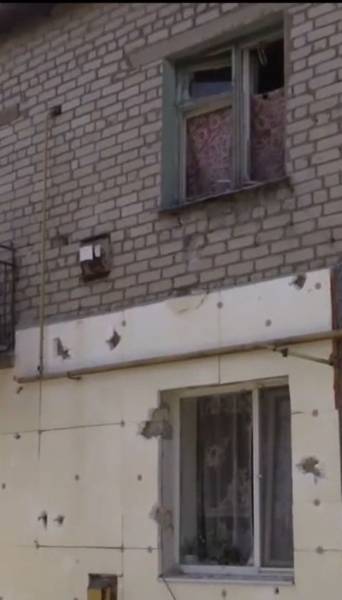 The military say the shot from a distance of about 20 kilometers. The whole battery was firing from one direction.

“According to preliminary findings, working artillery of 152 mm caliber, rockets. Obviously Russian armed groups after yesterday’s provocations in Luhansk direction decided to take it out on civilians because there positions. It was a deliberate bombardment of the civilian population”, – said the press officer of the SCCC

Aggravation in Luhansk for two days. On the eve of militants attacked one of the positions. Managed to repel the attack, but died four soldiers. Has become known their names. These are the senior soldiers of the Marian najda, Taras Protsenko Andriy Chirva, Michael Shcherbaniuk.

But the attacks did not end, the aggravation was evident on the frontline. Near Krasnogorovka of Donetsk region anti-tank guided missile fighters shot down a military carrier that transported the water. The military said they probably calculated their route. One of the soldiers killed is Vasily Nechitailo of Nikolaev, the father of three children. Another soldier was injured. He was hit with shrapnel.

In General, uneasy at the frontline.