Adviser to trump arrived in Ukraine on celebration of Independence Day 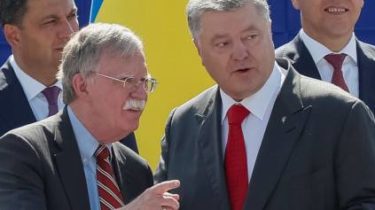 Adviser to trump arrived in Ukraine on celebration of Independence Day

He met with Petro Poroshenko.

To Ukraine there has arrived the adviser of safety of the President of the United States John Bolton.

About it reports a press-service of the President of Ukraine.

“Your visit this day, I am sure, is clear evidence of the strong support that the United States provided to Ukraine”, – said the head of state Petro Poroshenko.

He also expressed gratitude for the Crimean Declaration, which “clearly demonstrated the US position regarding illegally annexed by Russia occupied Crimea” and stressed that this position was supported by many international partners of Ukraine.

Special attention was paid to the issue of sanctions against Russia. “I would like to thank you for the sanctions. The sanctions, which were imposed by the US against the Russian Federation. And it is not a punishment. This is the motivation for Russia to return to civilized society, to remove their troops from Crimea and Donbass, not to use chemical weapons against other States, to make a civilized foreign policy, to honor and respect international law,” – said Poroshenko.

“I would like to clearly stress that the sanctions are effective. Sanctions force Moscow to pay a price for a gross violation of international law, she has in the last 4.5 years, and against Georgia in 2008, and at other times. I want to stress that Moscow is not going to stop football Championships, will not stop the wedding dance, don’t stop gifts of gas flows. Moscow will stop the joint position of the civilized world with the global leadership of our partners – the United States of America,” he added. 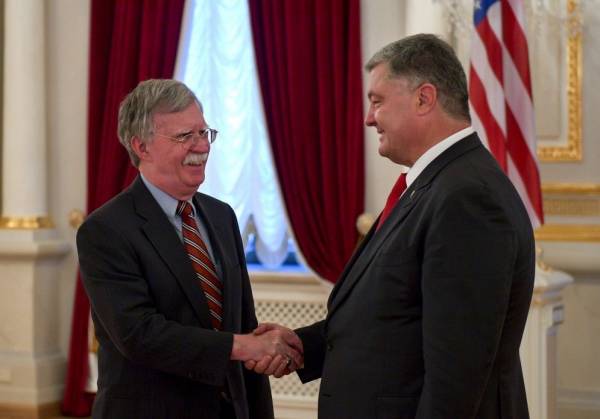 The head of state thanked for the greetings of President of the United States Donald trump’s message on the occasion of the 27th anniversary of independence of Ukraine.

The parties discussed ways of expanding economic cooperation. According to Poroshenko, it is already possible to speak about certain positive results of the Ukrainian-American economic cooperation. “Our turnover is a little more than a year increased by 70%. No country in the world demonstrates such growth and that the realization of my arrangements at the White house last year, which we reached with President trump,” he said.

Poroshenko thanked the U.S. for its support of reforms in Ukraine and expressed confidence in expansion of bilateral cooperation.

The President also noted that today during the parade on the Independence Day, Bolton had the opportunity to see the new Ukrainian army. “Ukrainian Armed forces are one of the most powerful and effective armies in Europe. We firmly keep Russia on the line of contact, provide durable resistance,” he said.

The President expressed gratitude to John Bolton for the participation of representatives of the U.S. Armed forces and other armies of NATO member States, in particular Britain, Canada, Estonia, Latvia, Lithuania, Romania and other countries-partners of Ukraine in the military parade on Khreshchatyk.

“It is a symbol of our cooperation”, – said Poroshenko and stressed that it has become a very good tradition, and recalled that last year in the 26-th anniversary of independence of Ukraine in Kiev there has arrived the Minister of defence of the USA James Mattis.

Advisor to the President for national security Affairs John Bolton thanked for the invitation to the celebration of Independence Day. “For me it is a great honor. I enjoyed watching the whole ceremony. Very Patriotic. And every year I have the opportunity to celebrate two days of Independence in one year. For me, August 24 today is a special day,” he said.

John Bolton noted that there is an opportunity to discuss the current situation in Ukraine and the challenges now facing the country, and the question in the international format. “President trump stressed the solidarity and support of independent Ukraine. You talked about the Declaration, which we did, not recognizing the illegal annexation of Crimea. It all comes from the American tradition of non-recognition of illegal annexation”, – he said.

Videovista Petro Poroshenko at the parade for Independence Day

August 24 in the center of Kiev held a parade for Independence Day. Petro Poroshenko congratulated the citizens on the occasion and paid tribute to fallen military and civilian with a moment of silence. 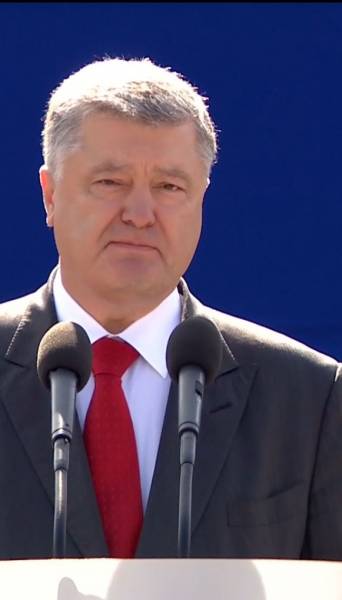