Dozens of Ukrainian diplomats went with the military in the Donbass 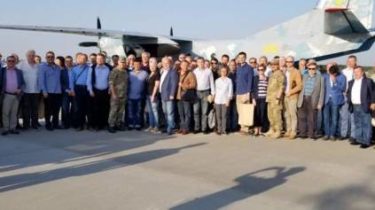 Dozens of Ukrainian diplomats went with the military in the Donbass

Ukrainian ambassadors who arrived in Ukraine at the XIII Meeting of heads of foreign diplomatic missions, on Sunday, August 26, flew to the Donbass.

About this in his Facebook said the Minister of foreign Affairs of Ukraine Pavlo Klimkin.

“Morning. And 80 representatives of the diplomatic service are in a good mood to fly to the Donbass”, – wrote the Minister.

#НарадаПослів2018 Day 2. 80 representatives of the diplomatic service took off on #Donbass.

Published by the Ministry of foreign Affairs of Ukraine MFA of Ukraine on Sunday, 26 August 2018

It is noted that the conference brought together Ukrainian ambassadors from around the world to discuss experience and problems in diplomatic work. Yesterday there was the first part of the event in which heads of foreign dipuchrezhdeny and independent divisions of the office discussed the challenges and tasks facing the diplomatic service of Ukraine.

Several unusual diplomatic mission: together with our military ambassadors out on the front line pic.twitter.com/1LqQm4Hold

“Several unusual diplomatic mission: together with our military ambassadors out on the front line,” wrote Miller.

From 26 to 28 August, the foreign Ministry held the THIRTEENTH Meeting of heads of foreign diplomatic missions of Ukraine.