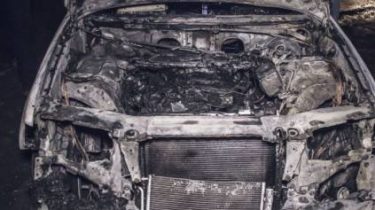 Also injured another two cars which were parked near the “German”

According to the Informant, in a car threw a bottle with an incendiary mix.

According to eyewitnesses, to a parked BMW X5 drove a car. Of his attackers threw him in the car a bottle with an incendiary mix, then fled in an unknown direction. The fire’s BMW burned to the ground.

Also damaged two cars that were parked near the “German”. Toyota Yaris burned his left side paplavinis rear left headlight. The owner of the Toyota had time to drive the car away from the fire and minimize the losses. In the Audi A6 the fire damaged the front left headlight and front bumper.

According to the owner of the BMW X5 shortly before the fire threatened the man with whom they had a conflict. The driver of the SUV allegedly scratched the car and threatened the man. I worked at a place the crew of the patrol police, rescuers of gschs and investigative team.