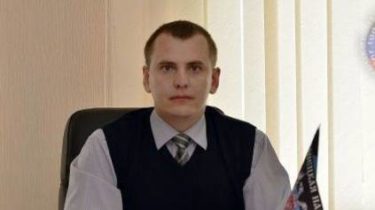 Yuri Lectures was supposed to be a replacement Zakharchenko.

Ukrainian counter-intelligence agents sent to the controlled area of one of those who headed the terrorist “DNR”. We are talking about the so-called culture Minister “DNR” Yury Lectures.

According to him, after the dismissal from the post of leader of the occupied areas of the Donetsk region, Alexander Zakharchenko, that he was to lead the occupied part of the region, says the story TSN.Week.

However, the man went to jail. As it turned out, he is our man in the near circle of the leader “DNR”. How they are recruited, and how much it leaked – secret behind seven seals. Recently recruited pseudolinear asked to evacuate. Due to the complex operation of the Ukrainian counterintelligence, the former officer was taken to the controlled area. Before him, the Minister of culture of the militants was the owner of a beauty salon. After him, the cultural front “Republic” headed by corporate animator, nicknamed “the cat Basilio”.

See also:
Independence day under fire. Why the militants went on the offensive, staging hell in Donbass

Now with the help of a defector is possible to learn the intimate details of the Board of the Russian henchmen. Management according to the principle of gang gatherings Zakharchenko instructed his subordinates personally. “He gathered the Ministers and said: “Here, I brought a bribe, I took it and the cashier put. And you, if you give, take and I prieste,” – said the Minister.

When in 2014 had to write a piece of “DNR” of the Donetsk composers was not found. Gymnopilus “Minister” had to bring from Russia. “Minister” dreamed of a different place in the hierarchy. He knew that, according to the plans of Russian special services, he had to replace the portraits of Alexander Zakharchenko. And he expected that his finest hour is almost here. The main intrigue is that quasilinear issued in the Kremlin in the Donbas continues, a real war between different centers of influence between the Federal security service and GRU, military intelligence.

“GRU officer Ivanovich introduced me as the future head of the Republic, and that this resolved the issue. I’m in GRU, but they have had competition with the FSB” – remembered Lectures.

See also:
Poroshenko will propose to the countries of Europe to join the restoration of Donbass

The candidacy of Lectures Grushnikov suggested that the star of “fake” promotional clips Maria Tsipko or she Mary Throw, Bavykin and Tarasenko. Real name provokatorshu unknown to us. Maria has created a perfect telebras victims of the “Kiev junta”. The woman performed in this manner by promoting anti-Ukrainian hysteria, and in Kiev was a “soldier’s mother”. In Odessa – “mourners to the Kulikovo Field”. In Kharkov – “the root Kharkov with the Bandera trophies.” In the occupied Donetsk, she came from Moscow as head of the “Foundation of martyrs of Christ.” It was Maria introduces a clever young man with their supervisors. In Moscow restaurant “Glavpivtorg”, outside intelligence agencies, “Minister” offer to lead the “DNR” Zakharchenko instead. He understands what is risk.

According to the Lectures, in case of the consent to head the occupied area of the Donetsk region to him in GRU’s proposed power and support. “Called the assistant Khodakovsky and Butler and tell them that you are in fact responsible for it,” recalled the detainee.

See also:
In Serbia have arrested the gunman who was at war on Donbass on the party of terrorists

However, the FSB won that confrontation. 2015 “the feds” finally staked on Alexander Zakharchenko. Since then, the leader of “DNR” demonstrates the wonders of political survival. And his former Minister was convinced that the puppets of the Kremlin are doomed. “A lot of know – long live” – this Donetsk law former Minister very well remembered. The Russian presidential aide Vladislav Surkov and the FSB at some point swayed and nearly lost influence in the Kremlin, but in the end pushed the competitors and left under a control over the war in Ukraine. “When the question of Surkov, Putin was solved, I became already uninteresting. I was stuck in jail, rastrelivat withdrawn”, – told ex-the Minister.

Moscow has left his life, and militants fired the “Minister” from behind bars. Now that counter-intelligence agents brought him to the territory they control, the future of his political rival sees the fugitive is not in pink color. “Zaharchenko, I think, eliminate. Timofeev, financial support Zakharchenko, smarter, anchors somewhere on the Islands under a different name”, he added.

Yuri Lectures is the only representative political Beau Monde “DPR” – controlled territory. Now he raised the suspicion of creating a terrorist group or terrorist organization. After a series of murders Givi, Motorola, Mozgovoi, and other leaders of the “young republics”, Yuri thinks this is safer. The warranty is a generous variety of details and facts that he can provide for planning subsequent operations of Ukrainian counterintelligence.