Poroshenko remembered the case, McCain pissed at him 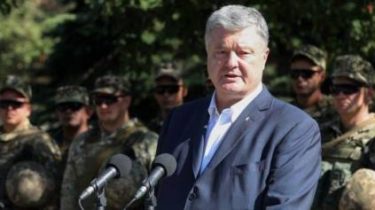 Poroshenko remembered the case, McCain pissed at him

The President, along with diplomats and the military honored the memory of Senator.

The President of Ukraine Petro Poroshenko together with diplomats and the Ukrainian military at the Donetsk region honored the memory of U.S. Senator John McCain, who yesterday passed away.

During his speech, the President recalled the case as it offended McCain when they went to Ukrainian marine corps in Shirokino.

“When I offered him to go with me and congratulate Ukrainian Marines in Shirokino, he has postponed his visit to Georgia and said that his place is here, in Ukraine”, – said Poroshenko.

See also:
Captured in Vietnam, the struggle for the presidency in the United States and support of the Euromaidan. What will be remembered for Senator John McCain

When the President and the Senator came up to Shirokino, the security Service of the President reported that the position of our Marines were fired upon.

“I told John – you’re the Senator, you don’t have to be there. I, as a President should be with his soldiers. And this is the first time John offended me, even for what I thought him to offer,” recalled Poroshenko.

“He said Russia will pay a huge price for this irresponsible adventure. And his whole life thereafter was devoted to protect Ukraine and Ukrainians”, – said the President.

See also:
“He died a great friend of Ukraine.” As official Kiev expressed condolences in connection with death of McCain

Recall, the us Republican Senator John McCain passed away on Saturday, August 25, at the age of 81 years. The day before he decided to stop treatment for a cancer that was found in him last year. Close McCain explained that the disease a year ago, developed aggressive, and the doctors ‘ prognosis was unfavorable. However, the Senator has exceeded the expectations of doctors and lasted a year.