“The process has passed the point of no return.” The religious leaders explained the strategy of the ROC and when to wait for Thomas 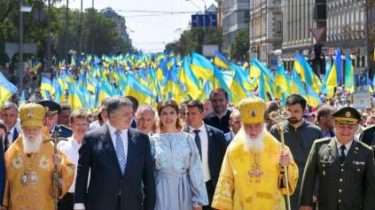 “The process has passed the point of no return.” The religious leaders explained the strategy of the ROC and when to wait for Thomas

The procession of the UOC-KP in Kiev © Reuters

A famous theologian believes that the decision should be expected in October this year.

The intrigue surrounding Thomas resolution on autocephaly began to turn these weeks into a tight knot. From the Ecumenical Patriarch waited at the end of July on the anniversary of the baptism of Rus. Then the decision was announced, and then the rumors that nothing will. 31 August, as experts say, to the Patriarch Bartholomew goes to the head of the Russian Orthodox Church Kirill to convince Ukraine not to give autocephaly.

As stated in the story TSN.Week, Ukraine’s President Petro Poroshenko during his speech, which was attended by the heads of churches, talks about the future of the autocephaly of the Ukrainian Church. To him applaud the leaders of the Orthodox churches. Then stood firm, only one man – the Primate of the Ukrainian Orthodox Church-Moscow Patriarchate, Metropolitan Onufry.

UOC-Moscow Patriarchate together with his guide in Moscow in recent months made a real hunt autocephaly. They launched a huge information front in the fight against the future independent Ukrainian Church.

For the Russian Church is very important to have controlled Orthodoxy in Ukraine through its structure – the UOC-MP. Independent Ukrainian Church, in fact, will cause a painful and devastating blow, since a considerable part of the faithful and bishops depart from the Moscow Patriarchate to one Local Church, and its creation is possible only in case of donation by the Ecumenical Patriarch of the Tomos of autocephaly.

At first there were hopes that the Tomos may appear on the Day of the baptism of Rus in late July, but nothing happened. Moreover in recent weeks increasingly, we hear that there is no autocephaly. Evil tongues say that the Ecumenical Patriarch could not stand the pressure of the Russian Church and surrendered.

TOMOS. THE PROJECT IS MINIMIZED?

After his dismissal from the post of Deputy head of the presidential Administration and the appointment of the Director of the National Institute for strategic studies, Rostislav Pavlenko, Russian media wrote – not complied with the instructions of the President, because the Tomos of autocephaly was not granted on the anniversary of the baptism of Rus. Obtaining autocephaly is part of the electoral program of the President. Pavlenko denied this thesis, and he further engaged in this process.

This well-known theologian, Archimandrite Kirill Govorun, which in the past has held various administrative positions in the Russian Church and the UOC-MP, said that Tomos has already written his teacher from the University of Athens. Therefore, it is one of those who is knowledgeable in this matter.

TOMOS. THE POINT OF NO RETURN

The UOC-KP hopes that the Tomos may appear on the Day of the baptism of Rus in late July, but nothing happened. Moreover, in recent weeks increasingly have to say that this is not autocephaly at all. Evil tongues say that the Ecumenical Patriarch could not stand the pressure of the Russian Church and surrendered. TSN.Week decided to check whether Ukrainian Orthodoxy and continue to be in captivity? Therefore, father Cyril says that at Constantinople there is no turning back. The only question is when.

In 2008, Ukraine was also close to obtaining autocephaly. But then, as says the priest of the UOC-MP George Kovalenko, everything was behind the scenes. The Ecumenical Patriarchate did not make such powerful statements in support of Ukrainian autocephaly. “Then there was no such statement. Everything happened behind the scenes. And these unofficial arrangements of a few people at a certain stage led to some misunderstandings,” he said.

Now really everything is different. The Ecumenical Patriarchate, headed by Bartholomew made a number of statements that the process is started, but without specific dates. On the celebration of the Baptism of Russia there arrived the legate of the Ecumenical Patriarchate, the Metropolitan of Gaul. He ignored the procession of the UOC-MP, but took part in state events. Rostyslav Pavlenko, President heads the process of obtaining autocephaly, says that everything goes according to plan. “The process is. No one stopped. Nobody set the task to Tomos for a date. On the contrary the Ecumenical Patriarch several times stressed that all steps must be clearly according to the canons, should be soaked all the necessary procedures. Continuing process whose purpose is the granting of autocephaly of the Orthodox Church in Ukraine”, – said Pavlenko.

Father Cyril Hovorun calls three scenario. 80% it puts on obtaining autocephaly in October. Only 10% he gives to the postponement and nothing on clotting. “I’d give a tiny chance that all this process will be disrupted and the prospects of granting of the Tomos near future will remain. Sources at the Phanar say that all will be well. Everything goes according to plan,” added Govorun.

The head of the ROC Patriarch Kirill has asked for an urgent audience with Ecumenical Patriarch Bartholomew. August 31 should be a visit to Istanbul. You’re lucky that Kirill at Fanar – unknown to anyone. Only guesses – from another blackmail to intimidate the civil war in Ukraine, which has already announced the main sponsor of the UOC-MP Vadim Novinsky. This is the last chance that Cyril does not give the Ukrainian Church’s independence.

“Patriarch Kirill is very narrow, in fact, a corridor for maneuver. Let’s start with the main issue – let’s all give back, get things back to point zero and no autocephaly, no Thomas will not. Is not ready to go to Constantinople. So will try to offer some compromises,” does not exclude religious publicist Tatyana Derkach.

In fact Kirill, there are only two major strategies. The first is to delay the process indefinitely. Other Tomos to admit it, but to transmit it under control of the Russian Orthodox Church the head of the UOC-MP, Metropolitan Onufry, although it is unlikely that it will go to Bartholomew. However, in the middle of the Church Onuphrius is also not so simple.

“In fact, in Ukraine there is a large request and the clergy and people to receive the Tomos. I don’t think the Ecumenical Orthodoxy will be neglected. If this is violated, then we as loyal to Ukraine, we will see that in the Church there are some geopolitical, political or other, and we would like to in the Church acted love, truth, justice,” – said Kovalenko Georgiy.

THE CHURCH WITHOUT LOVE AND TRUTH?

“Night already began to arrive and to call the priests of the signatories and very affectionate, but strictly threatening consequences. It is the representatives of the governing structures of the Church. Asked to withdraw their signatures. And in General in a certain way trying to deprive people of the opportunity freely and publicly to say,” said father George.

He says that are only intended to create a broad, public dialogue process, in order to avoid wars of jurisdictions, was dominated by love and respect for each other. Now in his Church it is not.

Thus, Tomos, most likely – the thing is inevitable. However, this is only the beginning. The development of the local Church, it would be a long and difficult process. The authorities and representatives of the churches now need to think as painless for society and state to create a Unified Church and not to give the Kremlin has already announced to start a religious war.