Screams and explosions of flares: there was a video and details of mass fight of football fans in Kiev 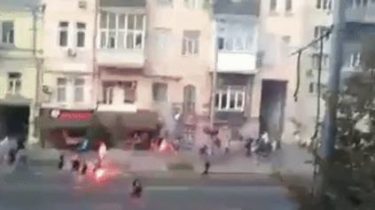 Screams and explosions of flares: there was a video and details of mass fight of football fans in Kiev

In the fight of football fans on the street Velyka Vasylkivska street in Kyiv was attended by the fans of Kiev “Dynamo” and the Dutch “Ajax” – these teams played today the match-response of the playoffs of the Champions League.

As reported by the community Troublemakers & Ultras Action, about 40 representatives of various groups of football fans Dynamo attacked 30 fans of “Ajax”. The guests from the Netherlands hid in the pub, part of the beat.

The video of the fight that appeared in the Network, it is clear that soccer fans used flares, and the Dutch threw their opponents to the chairs of the pub.

Caution! In the video there is profanity!

Earlier it was reported that on Tuesday, August 28, in one of the pubs in the Pechersk district of Kiev there was a fight between football fans. The police officers who were patrolling in the capital, saw the conflict on Bolshaya Vasilkovskaya street. Calling on the help of a special unit of police detained nine active participants of the fight, which brought to Pechersk police Department.