Smoke bombs and assault police. The owners can not divide a building in the exclusive place in Kiev 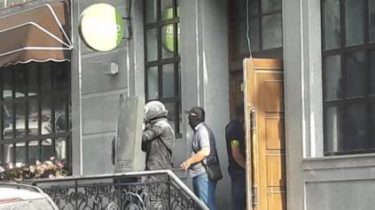 Smoke bombs and assault police. The owners can not divide a building in the exclusive place in Kiev

Smoke bombs, fire extinguishers, storm, the special police forces and handcuffs. Thus ended the fight for real estate on the capital Vozdvizhenka. The district is one of the most expensive in Kiev, so attractive for business. In the office, because of which there was a fight, already changed owners, say witnesses.

The police of Kiev brings the first batch of guys who are around 17.00 broke into the office building on Vozdvizhenskaya street, 56. Explain “closed and resisted.”

In this room on four different floors of the company – law, insurance, Italian bar and the interior design. As it turned out, two of the owner can not divide this building. And one of them brought guys of sports appearance. According to passersby, there were between 20 to 40. And they just took the room.

One of the defendants called the police. The guys fought back, using the fire extinguishers. White powder covered the whole street and parked cars. The assault was several times. The part of the police escorted, came out of themselves without relying. What are the causes of the confrontation, the police has not yet reported.