Burned effigy of Putin and the tears of mothers. In Ukraine commemorated the anniversary of the tragedy Ilovaiskaya 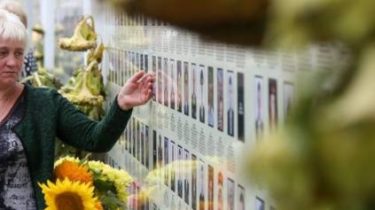 Burned effigy of Putin and the tears of mothers. In Ukraine commemorated the anniversary of the tragedy Ilovaiskaya

Exactly four years ago in the Donbass Russian regular army fired on a column of Ukrainian volunteers and soldiers who came out of the environment. 400 dead, 500 wounded, 300 prisoners and a few dozen missing soldiers.

Kiev. Rush hour. On the street where the Russian Embassy, no transportation. Within minutes, the Windows of dipsomania appear white crosses with photographs of those killed in Ilovaysk.

“It are the crosses of those whom we know, with their faces buried – 368 crosses. Besides, there are unidentified bodies and is people who in Ilovaisk corridor was missing,” says a military doctor Vsevolod Steblyuk.

Massacre in Ilovaysk arranged personally by the President of Russia Vladimir Putin, convinced the soldiers and the relatives of the victims. For illustrative visualization “blood on the hands” watered crosses with red paint.

And though it’s been 4 years since the tragedy the mother of the dead barely holding back the tears. For the fallen heroes in prayer read out by a military chaplain.

Anniversary of the Ilovaisk tragedy. Exactly four years ago in the Donetsk region Russian regular army fired on a column of Ukrainian volunteers and soldiers who came out of the environment. Four hundred dead, five hundred wounded, three hundred prisoners and several dozen missing soldiers. 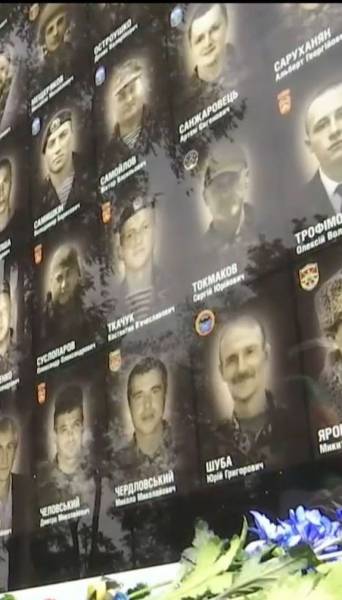 The then chief of staff of the battalion “Donbass” Vyacheslav Vlasenko, the legendary commander with the Callsign owl says, a bloody hallway would come out with even more victims if the Ukrainian troops are fully believe to the Russian officers, who promised a green corridor.

“They demanded to surrender their weapons and withdraw from Ilovaisk, we did not believe them and went as it went, we caused a terrible loss to them, they hide the numbers, and believe me, there is the loss of times more than our losses. 4 years I was in the war and 4 years from the day my revenge for everyone who died and wounded in Ilovaiskaya” – said the chief of staff of the battalion “Donbass” in 2014 Vyacheslav Vlasenko.

Before to pass to the Russian diplomats, the protesters adopted a resolution for the immediate release of political prisoners, they are indicative burn effigy of Putin.

However, none of the diplomats did not dare to go out. Therefore, the resolution decided to bring the diplomats personally. Come out nobody wanted and advised me to send in the mail.

Meanwhile, on Mikhaylovskaya square to the “wall of remembrance” agree those who survived in Ilovaiskaya boiler.

“On the one hand the joy that he’s still alive. Well, the memories of what happened that day when the shot column, they are with me always not only in this day… Time heals. Even from war,” – says Maxim Pinigin call “Lex”.

After a moment, the Patriarch begins the memorial service. The mother of the dead they say that on August 29 the government should recognize a day of remembrance of the victims in this war.

“My moms were together, we talked to cyborg, “Aidar” – why 29-e? Because it is an invasion of Russian troops and on this day had the most losses,” says the mother of the deceased Natalia Kharchenko.

In Odessa citizens paid tribute to the improvised installation “Sunflowers Ilovaysk”. Relatives of the victims word for word quote from a recent phone.

“They said that they will be providing a green corridor. And all communication was gone. The impression is that he is there, just not near us”, says the wife of the deceased Valentine Radchuk.

In Krivoy Rog today officially declared a Day of mourning. After all, local authorities are already prescribed in the Charter of the city on August 29 as a day of remembrance for those killed in ATO. At the initiative of the battalion “Kryvbas” in the local Park are planning to install a separate memorial.

“The monument will be installed with absolutely no budget. That people collect pennies: sell the attributes of the battalion, cups, magnets, stickers, accept charitable contributions. This monument is quite modest. Not in Paphos right now. There will be Ilovajskij cross and sunflowers will Ilovajskij”, – said the curator of the battalion “Krivbass” Nikolay Kolesnik.

A memorial service was held in the river. It was here four years ago from the front, hundreds were injured, and later – the bodies. Most of them were unidentified. To pay tribute to the fallen defenders, in the morning dozens of people came to the Alley of heroes in the river with flowers and candles.

Now Ilovajskij boiler is considered the most bloody special operation of the Kremlin in Ukraine. Hundreds dead, hundreds wounded and as many missing. All of us, I believe, for such sacrifices in the near future the main culprit of the tragedy Ilovaiskaya in the best case will be tried in the Hague.