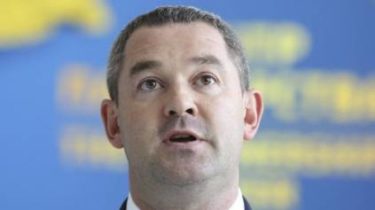 In an interview with Lutsenko said that it has a personal claim to Prodan.

Prosecutor General Yury Lutsenko was transferred to a Specialized anti-corruption Prosecutor of the materials of criminal proceedingsthat relate to the acting Chairman of the State fiscal service of Miroslav Sold.

About this TSN.ia has learned from its own sources in SAP.

“We are talking about two episodes – the acquisition and construction of property through nominees in Ukraine and Turkey,” – said the source.

According to TSN.ia Sold tomorrow call in SAP as a witness.

We will note, on August 9, two properties Sold in the Turkish resort city of Bodrum at a cost of 500 thousand dollars was seized.

According to investigators, a property Sold was bought by Vitaly Astakhov – probably he is the Trustee Sold and the legalization of shadow funds.

We will remind that in interview to “the Ukrainian truth” Lutsenko stated that has a personal claim to Prodan.

“Until I voiced a complaint to the numerous cases on smuggling, which allowed his subordinates. But now I’m working where I have a claim to it (Prodan – ed.) of personal. In that moment, when I get a sufficient amount of evidence will make a procedural decision”, – said Lutsenko.

At the same time, the Prime Minister of Ukraine Volodymyr Hroisman has promised to protect acting Chairman of the State fiscal service (GFS) Miroslav Sold.

“I went in a public plane, has declared war on smuggling together with the GFS, MIA, Nicolicea to stop the importation of goods. It is difficult for us, in these structures there are black sheep that contributed to these schemes. But I will defend the leadership of the customs of the SFS, who started a real fight,” he wrote, Groisman.

We will remind, on August 21 Lutsenko declared that employees of DFS and the tax police discovered 100 tonnes of tissue in the amount of $ 150 million without any documents of origin. This product was discovered during the investigation into the theft of 37 containers of the Odessa customs.