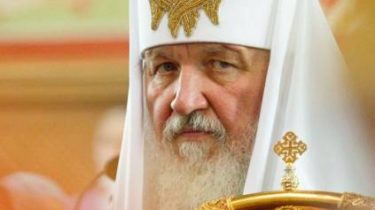 The Patriarch said that the meeting was devoted to questions of inter-Church relations and the situation in Ukraine.

Patriarch Kirill of Moscow praised the results of the meeting with Patriarch Bartholomew in Istanbul.

About it reported in a press-service of the Primate of the Russian Orthodox Church, TASS.

“All right,” said Cyril, leaving the building of the Patriarchate in Istanbul.

However, the Deputy Chairman of the Department for external Church relations Archpriest Mykolai Danylevych assured that the meeting of the patriarchs was devoted not only to the “Ukrainian question”, but also “other relevant issues of inter-Church relations”.

We will remind, Patriarch Kirill of Moscow arrived in Istanbul in the residence of Patriarch Bartholomew of Constantinople. The meeting was held in the presence of all the members of the Synod of the Ecumenical Patriarchate, which from 29 to 31 August gathered for its regular session.

Ecumenical Patriarch Bartholomew stressed the importance of dialogue between the representatives of the clergy to address important issues. In turn, Kirill appeal was immersed in memories, putting that the clergy have always found a common language.

Earlier during a speech at the parade by the Independence Day the President of Ukraine Petro Poroshenko has criticized the Russian Church, which “sanctifies a hybrid war against Ukraine Putin, who night and day prays for the Russian authorities and army – also a Russian”. The President stressed on the need of the Local Orthodox churches for the unity of Ukraine. In the Russian Church, the Ukrainian President called it “a bold politician who is trying to hold on to power,” and the Church is unwavering compared to the transience of power.

Media wrote that Constantinople reportedly ready to grant autocephaly to the Ukrainian Church. Publicly about the decision is still not declared, but the representatives of the Russian Orthodox Church say that Bartholomew made aware of other local churches.