Entourage Zakharchenko trying to escape from the territory of “DNR” – Lisyansky 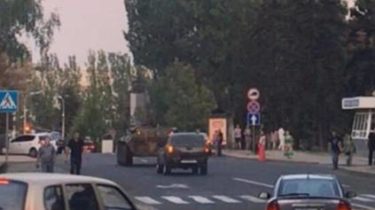 Entourage Zakharchenko trying to escape from the territory of “DNR” – Lisyansky

Militants “DNR” after the murder Zakharchenko carried out arrests on the streets and in homes, and entourage Zakharchenko trying to escape from the territory of “DNR”.

This was announced on his page in Facebook the coordinator of the regional Ombudsman of Ukraine in Donetsk and Luhansk oblasts Paul Lisyansky.

“PPC “Maori” only works on the entry in the “DNR”. KPVV “Marinka” and “Gnutoo” from the “DNR” entry and exit is closed. From “DNR” people are not released not in Russia, nor in ARDLA“, – said the coordinator of the Ombudsman.

According to him, the fighting that night, is not actively held, automatic and machine gun fire was heard only in Marinka.

“At night there were arrests, I know about the two. People came directly to the apartment at night. Entourage Zakharchenko trying to escape from the territory of “DNR”. In civilian disguise and trying to escape. Donetsk encircled military equipment, all military units of armed opposition groups is given in combat readiness. This situation according to sources in illegal armed groups “DNR” will last 3 days,” said Lisyansky.

THE SITUATION IN THE DONETSK AND ORDO. Spent the night on the demarcation line, was in Marinka, Krasnogorovka, Mayorsk. Combat…

On the eve of the coordinator of the Ombudsman noted that there were reports from activists and local sources that the intelligence agencies of illegal armed groups “DNR” EN masse detain people on the streets.