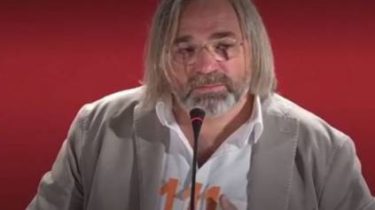 Documentary Kosakovsky made a fiery speech during the presentation of his film.

Russian documentary filmmaker Viktor Kosakovsky at the Venice film festival gave a speech in support of a wrongfully convicted in Russia of Ukrainian political prisoner and Director Oleg Sentsov.

He stated on 1 September during the presentation of his film “Aquarelle”.

“You see “111” (the men shirt was attached figures – approx.ed.)? Today is the 111th day of the hunger strike of Oleg Sentsov. What I say is not political action, it is simply the act of compassion. I don’t think the international film festival is a place for political rallies and festivals for movies. However, as a person, as a colleague of Oleg Sentsov, I can’t forget that our colleague on hunger strike for 111 days. We should not forget. This is not a political action, is an act of compassion. Please follow my example – write it here or here (shown in different places of the garment – approx.ed.). Then, tomorrow, 10 people will write “112”. The day after, a thousand write “113”. After that, the host of CNN says “114”. We must not forget it. We should say: “We remember you, stay with us, we remember you!” – he said, barely holding back tears.

Recall, 25 Aug 2015 Sentsov was sentenced to 20 years imprisonment in a strict regime colony. He was accused in Russia of preparing to commit terrorist acts in Simferopol, Sevastopol and Yalta. May 14, 2018 Sentsov announced an indefinite hunger strike. The only condition for termination is the release of all Ukrainian political prisoners who are on the territory of the Russian Federation. To ask Putin for pardon Sentsov refused. According to his lawyer, he has a very low pulse, anaemia and heart problems, but the hunger strike to refuse he is not going to.

Last month producer Anna Palenchuk said that Oleg Sentsov after his release, the film “Rooms” in his eponymous play. According to her, Sentsov continued to work on the script of the film in personal correspondence from prison. “Not every book can be filmed, as not every play. But this thing I wrote for a long time, I see very clearly – it is necessary to close eyes. Even in the place where I am, not knowing their own future, I do believe in the future of this production,” wrote Sentsov in a letter that Anna palenchuk read aloud during the presentation of the project the ribbon at the Odessa film festival.