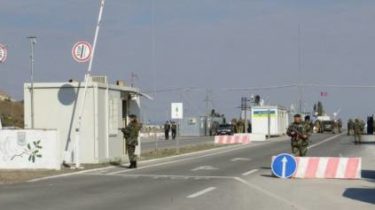 People were in the blockade of terrorists in uncontrolled Ukraine territories

On KPVV Donetsk region citizens ‘ movement occurs only in the direction of the temporarily occupied territory, in the opposite direction the movement of persons and vehicles missing.

This is reported in the press service of the Donetsk border detachment of SBS.

“From now on all control points of entry and exit on the boundary line in the area of Operations of the combined forces began crossing operations in connection with the autumn timetable. The passage of persons and vehicles is carried out from 7.00 to 18.30. Change the time mode is primarily associated with a component of its security”, – the press-officer of the Donetsk border detachment Valeria, Karpilenko.

According to the citizens who followed through the line of demarcation from the temporarily occupied territory of Ukraine and are unable to cross the KPVV fighters, border guards, it became known that the militants are pass selectively and completely denied to those who want to leave from the occupied territory.

We will remind, on the eve of the leader “DNR” Alexander Zakharchenko died after the explosion in Donetsk. The SBU later confirmed the death of the gunman.