“Prepare for war”. Why thugs in a provocative t-shirts came to Pochaev Lavra 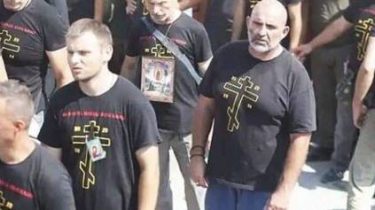 “Prepare for war”. Why thugs in a provocative t-shirts came to Pochaev Lavra

Representatives of the “Russian world” looking for opportunities to discredit Ukraine.

A week and a half before the visit of the head of the Russian Orthodox Church in Istanbul, the Ukrainian Orthodox Church of the Moscow Patriarchate organized a procession to the Pochaev Lavra. A dozen strong men there wore t-shirts with the inscription “Prepare for war” and pulled out the flag, which in 2014 year was consecrated the militants “DNR” for war with Ukraine. As reported in the story TSN.Tyzhden, August 19 from Kamenetz-Podolsky, Khmelnitsky region to Pochaev Lavra a large procession went to the faithful of the Moscow Patriarchate.

See also:
In Kiev-Pechersk Lavra unearthed a unique wall of the 12th century

Pochayiv is a small town in the Ternopil region, where one of the most well-known for shrines of Ukraine – Pochayiv Lavra. The scale is amazing. I have the feeling that the monastery is almost half of the city. The Shrine is surrounded by a huge heavy fence. The city is actually financially dependent on the pilgrims who come here from countries of the former USSR.

Pochaev Lavra is often called an Outpost of the “Russian world” in Western Ukraine, because in 2003, it was given to the use of the Moscow Patriarchate. It personally worked Viktor Yanukovych. For him even a heliport was built here. Then, before the war, the Abbot of the monastery had a huge impact on everything and everyone in the city. “In fact, the Abbot of Pochaev Lavra affect the rest of politics, and public life in Pochaev. The mayor could not choose without the consent of the Abbot. Whom the rector will agree – was chosen. Deputies were also chosen. Now the situation has changed dramatically”, – said the representative of lustrating Committee in Ternopil region Vasily Gabor.

Now Laurel is always in a scene of anti-Ukrainian literature sells, the kids coloring with the Russian military claims to be. But the last organized it in a procession clearly aspires to the provocation. 20 thousand people went from Kamenetz-Podolsk. Taras, a local activist, says that t-shirts “Prepare for war” was noticed only when the procession entered the town.

See also:
“Mother’s prayer”. In the Rivne region, the students sang at the festival of the UOC-MP on the Russian tsars

“First, as you can see from the video, people were organized in a column to the monastery, Pochayiv Lavra. Then, as I told people, they were walking with these t-shirts in the city alone. People were waiting for some result,” added the activist Taras palianytsia.

Pulled them by the people of sports appearance. Behind, holding hands, are the same sturdy men. According to the activist Ivan Kovalik, the collected evidence suggests that the March was well organized provocation.

T-shirts, according to our data, were given to the organizers of Kamenetz-Podolsk diocese of the UOC-MP. After the procession, the law enforcers detained several men. We have a written explanation of one of them. “Brethren of the procession were distributed t-shirt in black with quotations of the Psalms in the old Slavonic or Russian. The brethren who were handing out t-shirts, belonged to Kamenetz-Podolsk diocese,” – said the detainee.

Secretary of Kamenetz-Podolsk diocese of the UOC-MP Archpriest Alexei (Michalchuk) reported that his diocese is not an organizer of the procession. According to him, the procession of people called on their faith and the call of the heart.

Why would the UOC-MP was handing out t-shirts?

This Friday, the Patriarch of the Russian Church Kirill arrived to persuade Ecumenical Patriarch Bartholomew to give the Ukrainian Church the Tomos of autocephaly, but had to go with something and not empty handed. Representatives of the Moscow Patriarchate have repeatedly pointed out – in the case of receiving the Tomos in Ukraine will be religious or even civil war. In particular, this was the main sponsor of the UOC-MP to the Russian oligarch Vadim Novinsky.

“I very clearly said his Holiness Patriarch Bartholomew: if any document will be made available, well at least some, even the least meaningless, where any specifics will not, in principle, but the document that we have in the country will start a civil war,” said Novinsky.

See also:
With the women-guards and people’s Deputy from “opposition bloc”: the procession of the UOC-MP prayed for Patriarch Kirill

Therefore, the Ecumenical Patriarch had to demonstrate the war began. All procession accompanied close to the UOC-MP and the Union of Orthodox journalists. Any reaction to calls to “Prepare for war”, or provocative flags of “new Russia” would propagadistskoy weapons Cyril. “This card Cyril will use in order to thwart the granting of the Tomos. Here, they say, see the confrontation between believers. You imagine what will happen when Tomos will be provided by the Ukrainian Orthodox Church.” – says the activist Kovalik.

By the way, the UOC-MP has defended himself from criminal cases on the t-shirts under large letters, “Prepare for war” has a little something to prove is a quote from the Bible. A flag with an Orthodox Saint. Nothing that a symbol of war in “DNR”. On the official website of the Moscow Patriarchate was surprised, saying, “participants in the procession Pochaiv was accused of quoting the Bible.”

In Pochaev, there are those who firmly believe that not going to the Local Church in the event of its creation. Thus, in their opinion, Ukraine as a state does not exist. “One Patriarch is supposed to be. Russian. Because we are Slavs. Russian. Ukraine is not” – said the parishioner of the monastery.

The Pochayiv is not just an Outpost of the “Russian world”. There are people who understand what Russia and its role in the war. And that they would be drawn into a massacre. Despite the good news from the Ecumenical Patriarchate, the Tomos of autocephaly yet. Consequently, a great provocation under the name “Prepare for war” not the last, because just one bloodshed can wipe out all the way to the formation in Ukraine of a national Church.

Video”get Ready for war”: who and why gave t-shirts to pilgrims of the UOC-MP

A week and a half before the visit of the head of the Russian Orthodox Church in Istanbul, the Ukrainian Orthodox Church of the Moscow Patriarchate organized a procession to the Pochaev Lavra. Everything would be fine. But a dozen strong men there wearing t-shirts with the inscription “Prepare for war!”, And pulled the same flag that in 2014 dedicated the militants “DNR” for war with Ukraine. 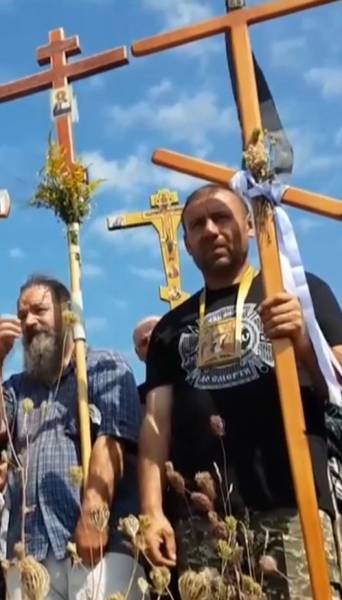