Putin spoke with Poroshenko “tough, clear and very easy to understand” – Peskov on the memoirs of Hollande 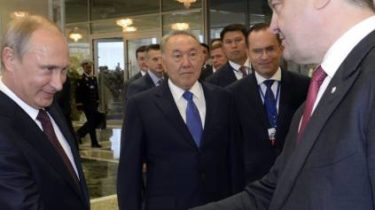 Putin spoke with Poroshenko “tough, clear and very easy to understand” – Peskov on the memoirs of Hollande

In the Kremlin denied that Russian President threatened “to crush Ukrainian troops”.

Russian President Vladimir Putin threatened the President of Ukraine Petro Poroshenko “to crush Ukrainian troops” during the talks in Minsk in 2015.

About it in interview to TV channel “Russia 1” said the press-Secretary of Russian leader Dmitry Sand, RBC.

According to him, during the talks, Putin spoke with Poroshenko “tough, clear and very easy to understand” and “didn’t tell him complimentary phrases.

“But, of course, that formulation [about the threat to “crush Ukrainian troops”] were not used,” — said Peskov.

See also:
Revelations Of Hollande. The former President of France has discovered the secret of the meeting with Poroshenko, Putin and Merkel

Also, Putin’s press Secretary believes that the former President of France, Francois Hollande, who said in his memoirs about the negotiations in Minsk, had been “incorrect”, reports “Interfax”.

“As a rule, declassified and reveals some moments with more than the current policies. And, for example, Mr Hollande is ineffective politician, but not entirely correct, of course, talking about those who are still working, who performs his duties especially in such sensitive areas as for example, the Ukrainian business”, – said Peskov.

We will remind, ex-President of France françois Hollande gave the light of his memoirs under the title “Lessons of power”. The book instantly became one of the most popular in the course of this week, the French gained more than 110 thousand copies. In the book, in particular, placed memories Hollande about the talks in Belarus in February 2015, when the leaders of France and Germany tried to stop the aggravation of the situation in the Donbas, where the fighting took place in debaltseve.