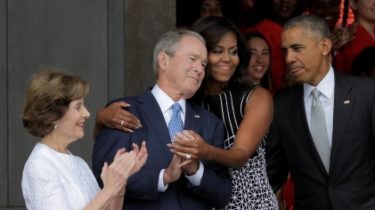 The incident occurred during the opening of the National Museum of African American history.

Now in American there are photos, the steepness of which is through the roof. In the picture – she’s with the ex-US President George Bush, and photographed the current head of the United States Barack Obama.

The incident occurred during the opening of the new Smithsonian National Museum of African American history and culture in Washington. It is reported by Huffingtonpost. The woman with the little girl decided to take a selfie with Bush, he took her phone and immediately gave it to Obama, who stood with his back to the made a better shot.