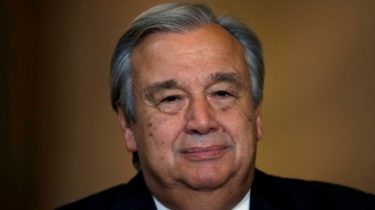 President Petro Poroshenko congratulated the former Prime Minister of Portugal, antónio Guterres with a nomination for the position of Secretary General of the UN.

During a telephone conversation with Hutterites Poroshenko expressed confidence that the new Secretary General will be to demonstrate a principled stance in upholding the purposes and principles of the UN Charter and will focus its activities on international peace and security.

Poroshenko also thanked Guterres for his active position during the tenure of the high Commissioner for refugees and the United Nations concerning the humanitarian crisis in the Donbas caused by the Russian aggression against Ukraine.

António Guterres has pledged their commitment to the principles and norms of the UN Charter, and thanked Ukraine for services rendered in the framework of UN Security Council support for his candidacy for this position.

We will remind, on 6 October, the UN Security Council approved a resolution which recommended that the UN General Assembly to appoint a candidate from Portugal, antónio Guterres to the post of the UN Secretary General.