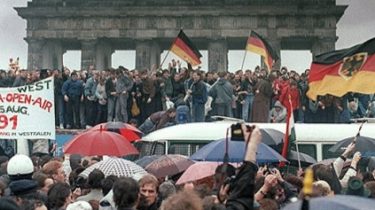 Ukraine will be successful if it maintains its commitment to the Western way.

Postwar Germany had once faced the same problems as Ukraine today. Here’s how to cope with them.

This writes Alexander Motyl’s article, “the division of Germany during the cold war can serve as a lesson for Ukraine”, published on the website of the journal Foreign Policy.

Ukraine is lucky in her misfortune. Russian leader Vladimir Putin formally annexed Crimea and informal – Eastern Donbass. During the conflict killed thousands of Ukrainians. But most of the West supported Kiev, have imposed sanctions against Russia and expressed support for the reform in Ukraine. In 2014, Ukraine has become more strong, stable and safe.

See also: the War in the Donbass and Minsk: the danger of “security zones”

But Kiev still faces a difficult path – not least because there is an inherent contradiction between attempts to reunite with its breakaway regions and implementation of Pro-Western reforms. Moreover, Ukraine doesn’t know what to do with 35,000 separatists with heavy weapons, which is currently in control of the Eastern Donbass, the occupied territories are also home to the Pro-Russian elites and the public, who would block reforms if it remains part of Ukraine.

To maneuver between these two contradictions will be easier if Kiev uses in its policy a model of post-war West Germany. The similarities are striking. As post-war Germany, Ukraine split into two areas – a Western-oriented and Russian-occupied; it needs to restore state, society and the economy, it is on the border between the democratic West and the authoritarian East. Most importantly, as Kiev today, bonno had to make difficult trade-offs between integration and construction of Pro-Western States and they did, in the end, they achieved success in both directions.

No historical analogy may not be perfect. Then divided Germany just lost the war, Ukraine emerged from the ruins of Empire 25 years ago. West Germany was actually occupied by the Western allies, while Ukraine received their support. East Germany was a real state, and the Eastern Donbass and the Crimea remain disputed territories.

See also: the Second anniversary of the Minsk agreements, 10 of thousands dead and more than 14 thousand explosions. Infographics

Nevertheless, the German experience can teach Ukraine how to continue its development, temporarily ceding control of part of its territory to outside powers. A good approach is to consider how three key West German Chancellor – Konrad Adenauer, Willy Brandt and Helmut Kohl held their country in this difficult journey.

From Konrad Adenauer, who became Chancellor shortly after the war, Ukraine may learn why it is important to accept the loss of their territory, and how it will help in the long run. Adenauer believed that West Germany was faced with the choice of unity or freedom. Free and Pro-Western Germany, he thought, will never be able to unite with the Soviets controlled the East. And although he remains fully adhered to the principle of final unification and indivisibility of the German nation, he realized in 1945 that “Russia occupied part lost to Germany for an indefinite time.”

Since Adenauer made a choice in favor of the West, West Germany received aid under the Marshall plan, joined the European coal and steel community and NATO, rearmed and took advantage of the “economic miracle” of the 1950s. This policy is costly. Turning to the West, Adenauer, therefore, allowed East Germany to acquire the features of statehood, which further separated the German people.

Adenauer was right, he chose freedom, when Germany was in desperate need of restoration. Kiev must also strive to remain Pro-Western government in the face of Russian hostility. Therefore, a reasonable solution would be if Ukraine abandons its rhetoric about reunification and officially declare that Crimea and the Eastern Donbass is under occupation of Russia. Thus, it will be able not to allow anti-Ukrainian elements of the population in these regions to your business and give all responsibility for their well-being, Moscow. Then Kiev should focus on the development of political, military, economic and cultural institutions to make them fully compatible with Western institutions.

Ukraine may get another practical lesson from Willy Brandt, who was Chancellor in the early 1970-ies. During his tenure, the United States and the Soviet Union sought to improve relations and reduce their arsenals of nuclear weapons and East Germany became a fait accompli. Brandt came to the conclusion that the policy of neglect of East Germany a little advantage.

His new “Eastern policy” (Ostpolitik) normalized relations with the USSR, Poland and Czechoslovakia, has accepted the inviolability of postwar borders, and extended official diplomatic recognition of East Germany. This approach has opened new ways the impact on East Germany and, therefore, the promotion of German national interests.

Read also: Lavrov explained that Russia is at war on Donbass

Like Brandt, Kiev someday, you may have to do the unthinkable: to start negotiations with the separatists and the Crimean authorities directly. Now the exception to the Ukrainian policy is a significant part of the anti-Western elements of the population and is beneficial for Ukraine, this will allow it to accept a Pro-Western reform. But as soon as Ukraine will become the West to understand that the continued fighting and killing does not serve the larger goals, Kiev will need something like Brandt’s policy to put an end to the conflict. The example of Germany shows that the war cannot be stopped without any compromise with the separatists, as with the real participants in the peace talks. The case may even reach a certain form of quasi-recognition.

The final and most encouraging lesson to be taught courtesy of Helmut Kohl, who will explain how Ukraine might eventually get its territory back after winning in social and economic competition between the Ukrainian and Russian systems, not through direct military force.

By 1980, many Germans came to the conclusion that the German reunification was impossible. It seemed that the new status quo is established forever – but it lasted until then, until the reforms of Soviet leader Mikhail Gorbachev, and his statement that the lost socialist state will not be subjected to the Soviet military intervention destabilize the auxiliary modes and undermined the very meaning of the existence of the East German state.

See also: Tuck announced a strategy of de-occupation of Crimea and Donbas

East Germany retained its legal status as a socialist alternative to its capitalist cousin; as soon as socialism began to disintegrate, the game was over. Mass protests in November 1989 and headed westward flow of East Germans even more undermined the legitimacy of the regime. Two weeks after the Berlin wall fell, Kohl outlined their vision of the Association. By the end 1990 this vision became reality – but not because Bonn violently pushed it forward, but because the East German regime collapsed, the economy was on the verge of collapse, the vast majority of East Germans wanted reunification and the Soviet Union was too weak to stop him.

As Germany since Kohl, Ukraine should think about unification as the long term that will become a reality only when the success of a reformed, westernized Ukraine will be contrasted with life in a weak and isolated Russia. Ukraine can successfully promote reunification, but for that she needs to defeat Russia and its military puppets, and to win the competition between two competing systems. As Western Germany, Ukraine could easily win if it maintains its commitment to the Western way.