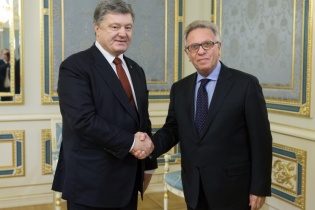 The head of state noted the role of the Venice Commission in the preparation of this law enforcement reform.

See also: Ukraine has launched a judicial reform: what will change and what is the biggest danger

“The interlocutors discussed the course of implementation of the amendments to the Constitution regarding justice, which entered into force on 30 September 2016. The President noted the important role the Venice Commission in the preparation of this core reform”, – stated in the message.

Poroshenko thanked Mr Buquicchio for the principled position of the Commission regarding the legal analysis of developments relating to aggression of Russia against Ukraine. In particular, the conclusions of the Venice Commission regarding the unconstitutionality of the referendum in the Crimea, and also about the discrepancy between international law Russia imposed a change in the order of admission to Federation new subjects.

Gianni Buquicchio confirmed the Commission’s willingness to continue to assist in reforming the judicial system in Ukraine.

Recall that in Ukraine today launched a judicial reform: the necessary changes to the Constitution the deputies adopted in June. According to them, now to create or abolish a judicial institution instead of the President will be Parliament. Higher specialized courts will cancel, but will leave the Supreme – all judges will score again.

It with this wording up to the beginning of judicial reform, the Verkhovna Rada on the proposal of the High Council of justice had to dismiss 29 judges, including those who were thrown in jail maydanovtsev.