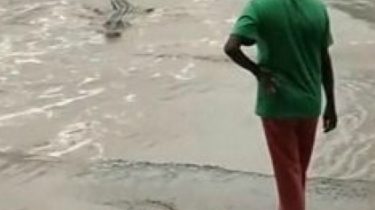 The woman realized how dangerous this behavior was.

Bold, but imprudent woman Thong drove a huge crocodile, which swam towards her and her dog in a salt lake in Kakadu National Park in Australia.

“I don’t think she realized how dangerous was this behavior” he said about the woman.

See also: In Australia, the crocodile ate the woman my friend decided to go for a night swim

It is believed that at least 120 crocodiles inhabit this stretch of the East alligator river in Kakadu National Park. The latest attack on human fatalities have occurred here in 1987.

We will remind, in the Australian state of Queensland man have spent three days on a desert island for the crocodilewho was chasing his boat.