In Istanbul, a monument to the cat, famous throughout the world 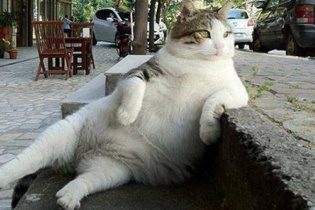 In Istanbul, a monument to the cat, famous throughout the world

A few days ago the cat came Tombile died.

In Turkey in Istanbul, a monument to the dead cat was Tombile.

He’s just always loved to sit thoughtfully, leaning with one foot on the curb, and thanks to this position became known to the whole world, according to Hurriyet Daily.

A few days ago, October 1, Tombali died. Because of this, local residents created a petition and asked the government to erect a monument to the cat.

Sculptor Seval şahin decided not to wait for the decision of the authorities and he created the sculpture. Its official opening will take place on 4 October, world animal Day.

We will remind, the Internet is gaining popularity is the photo of the cat from Japan, who could not choose between kogtetochke and bed. In a moment of hesitation he crossed his legs, to be both there and there. The hostess, in turn, took a picture of him in this position.

Even more the brightness of the photo provides a view of the little animals: a little surprised and helpless. A woman posted a picture online and she has gained 150 thousand likes and reposts. Moreover, the cat became a hero meme. On some he’s a DJ, and on other party of the Olympic games.