Over the past day killed one Ukrainian military – speaker ATO 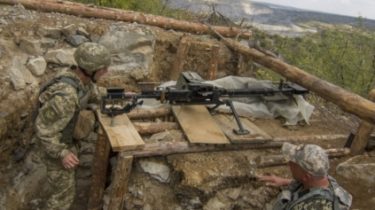 Over the past day killed one Ukrainian military – speaker ATO

One soldier was wounded.

Over the past day in the zone of the antiterrorist operation Ukrainian soldier was killed.

This was at the briefing on Thursday, October 6, said the speaker ATO Col., writes UNIAN. It is noted that another soldier was injured and another received a concussion.

“For the last day in the ATO area due to the fighting killed one Ukrainian soldier, one wounded, and one concussion,” said the speaker.

See also: In Minsk has appointed new date of discharge of the forces in certain areas in the ATO zone

We will remind, for last days fighters 40 times opened fire at positions of the Ukrainian defenders. In addition, over the past day found four of the drone.

In the Luhansk region around 5 settlements fired machine guns and grenade launchers. And in Novooleksandrivka, Novozvanivka, and in the Beams kruten’kiy enemy used mortars. Marinka, Hnutove and Shyrokyne fired by snipers.