Poroshenko invited Trudeau to simultaneously ratify the agreement on the FTA 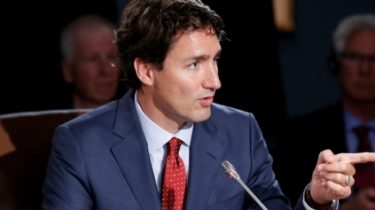 Poroshenko invited Trudeau to simultaneously ratify the agreement on the FTA

Ukraine and Canada will soon sign an agreement on cooperation in the field of security.

President Petro Poroshenko on the phone talked to the Prime Minister of Canada Justin Trudeau.

The two leaders discussed a number of issues. For example, agreed to sign soon the agreement on cooperation in the field of security and discussed the conditions of the intensification of dialogue on liberalization of visa regime between Ukraine and Canada.

President Poroshenko invited Trudeau to simultaneously ratify the agreement on free trade zone signed during the visit of Prime Minister of Canada to Ukraine on 11-12 July, the parliaments of both countries.

See also: There are photos like Trudeau and son met in the “Boryspil”

The Ukrainian head of state also informed about the situation in the Donbass and expressed hope that the policy of sanctions Canada against Russia will be saved.