Putin refused to come in Paris for talks with Hollande – media 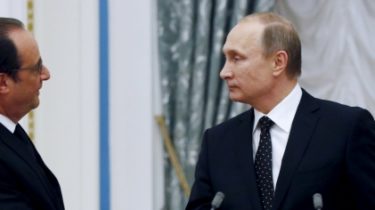 Putin refused to come in Paris for talks with Hollande – media

He did not agree to only talk about Syria.

Russian President Vladimir Putin refused to visit to France, during which was to be held a meeting with President Francois Hollande.

This was reported by Reuters, citing a source in France.

Putin, according to the interlocutor, do not agree to discuss the Syrian issue.

We will remind, earlier it was reported that Hollande is considering to cancel the meeting with Putin because of the crimes committed in Syria. In turn, the Kremlin said that the preparation for Putin’s visit to Paris continues.