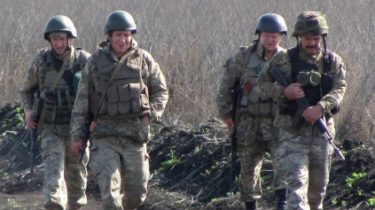 Over the past day the militants of the 22 times broke “the silence mode”.

Over the past day the militants of the 22 times opened fire at positions of the Ukrainian defenders. This is stated in the summary of the press center of staff ATO as at 6.00.

So, on the Mariupol direction recorded 16 attacks. In areas of Marinka, Granite and Pavlopol against the Ukrainian military has used rocket-propelled grenades, machine guns, small arms. Marinka invaders also fired from mortars caliber 82 and Shirokino — from cannon artillery 122mm.

In turn, in the direction of Donetsk recorded 4 attacks.

Under enemy fire from infantry fighting vehicles, grenade launchers, machine guns of large caliber, small arms were the Novgorod defenders, and the fortifications of the Ukrainian Armed Forces in Avdiivka fired from mortars caliber 82.

In addition, the direction of Lugansk recorded 2 violations “regime of silence”. Near Trekhizbenka strong points of ATO forces were fired at from machine guns and large caliber grenade launchers of various systems. Similar weapons the fighters used in the area of Novoaleksandrovka.

Recall that given the systematic nature of violations by militants of the “Framework decision of the Trilateral contact group about the breeding of forces and means”, the Armed forces of Ukraine are forced to postpone the date of allotment, located in near the Village Lugansk divisions.