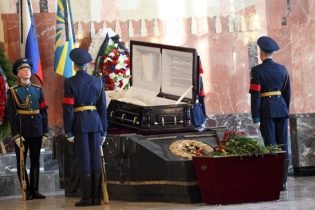 The funeral of the head of state will provide up to 706 thousand rubles, and on the tombstone there are nearly 4 million.

In the event of the death of the incumbent President of Russia Vladimir Putin, former President and current Prime Minister Dmitry Medvedev and former Soviet President Mikhail Gorbachev at their disposal would spend up to 706 thousand rubles. The corresponding bill was prepared by the defense Ministry. In spring this ritual would like to adopt a 40% greater amount of 1.18 million rubles, but then the document has not been peer approval.

At the same time, the cost of the headstone of the current and former heads of state will be reduced by only a thousand rubles – to of 3 927 million rubles. This writes Газета.Ru.

The funeral of the Prime Minister or Ministers will be cheaper – to 483 thousand. At the gravestones for them lay 3,575 million. The same amount provide for the burial of presidents of the chambers of the Federal Assembly, marshals, generals of the army and admirals of the fleet, as well as citizens, awarded the order of St Andrew or the order “For merits before Fatherland” I degree.

For the security agencies – the police, Ministry of defense, EMERCOM, Federal service of execution of punishments – to the funeral lay a maximum of 436 thousand rubles.

The difference in cost of the burial places of presidents, Ministers and military personnel stems from the fact that depending on the position the person put a different set of services, which are paid by the state: “someone’s gravestone with a bust, and someone with no bust,” said the Ministry of defence of the Russian Federation.

See also: the Kremlin has revealed the plans of Putin on birthday

The Russian Ministry of Finance did not specify how much money annually include in the budget for the funeral of senior officials. However, defense Ministry spokesman noted that it is appropriate to allocate annually the amount required for the burial of 10-15 people.

The burial of officials will be carried out at the Federal military memorial cemetery (first burial here took place 2013). Now there are 26 graves, among them designer Mikhail Kalashnikov, the Russian defense Minister Igor Rodionov, army General Viktor Prudnikov and others.

Earlier burials of Russian political figures mainly occurred at the Novodevichy cemetery. In particular, there is buried the first President of Russia Boris Yeltsin, wife of President of the USSR Raisa Gorbachev, General Secretary of the CPSU Nikita Khrushchev, the Ministers of foreign Affairs of the USSR Vyacheslav Molotov and Andrei Gromyko, former Prime Minister Viktor Chernomyrdin.

Costs for ordinary citizens seeing the last path is many times smaller. For example, the burial of pensioners who are not working and unemployed residents of Moscow, the budget provides for 16277 rubles.

We are talking about Dmitri hook – the head of the company “President-service”. This is one of the offices of the President of Russia. The body of a man shot in the head was found in the office. The Russian investigative Committee has appointed examination to determine the causes of death. Local media, meanwhile, actively circulate the version of suicide. The incident has allegedly found dead with a note asking not to blame anyone for his death.